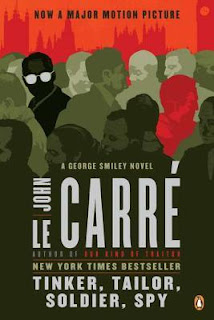 George Smiley is brought out of a forced retirement to uncover a Soviet mole who has been planted in the British Secret Intelligence Service (the Circus) for years. He was forced out of the Circus when Control, the former head of the service, directed a failed attempt to find evidence of the mole. When "Operation Testify" fails, ending with the shooting and torture of fellow agent Jim Prideax (code name Ellis), Control and those most loyal to him (like Smiley) were forced out and new leadership takes over. But new information has come and Smiley must discover which of the agents--code named Tinker, Tailor, Soldier, or Poorman--is the enemy agent. His investigation finds that Ellis was deliberately set up by those who wanted to protect the mole at all costs. Smiley gathers a small team of loyal agents to help him investigate--they must be successful because another debacle like Operation Testify could spell disaster for the Circus...and Britain.

This is another critically acclaimed spy novel by Le Carré, most notable for its commentary on the Cold War era and its relevance at the time when it followed the defection of Kim Philby. There's no doubt that it is an important book in the spy genre. But I have to admit that it did little for me. When I read The Spy Who Came in from the Cold back in 2016, I loved it. I don't generally love spy thrillers, but I thought Le Carré had written an absolutely superb book. I'm not sure if I just really wasn't in the mood for a spy novel this time or if the plot was just too convoluted for me (lots of wheels within wheels in this one), but if I hadn't had to finish this for one of my challenges then I probably wouldn't have. I think another difficulty was that there really is very little action (and in my mind spy/espionage = action). Smiley spends a lot of time investigating and talking to people and there's a lot of time spent in people's telling about their experiences rather than the experiences actually happening there on the page in front of you. Needed more showing and less telling. ★★★

First Line: The truth is, if old Major Dover hadn't dropped dead at Taunton races Jim would never have come to Thursgood's at all.

Last Line: The gun, Bill Roach had finally convinced himself, was, after all, a dream.