The Cannibal Who Overate 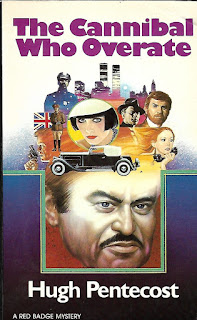 The Cannibal Who Overate (1962) by Hugh Pentecost

The first of the Pierre Chambrun mysteries set in the Hotel Beaumont. The Beaumont is the most luxurious of the luxury hotels in New York City and everything runs like clockwork, thanks to Chambrun's exquisite managerial skills. It even runs like clockwork when Aubrey Moon, the superrich, sadistic own of one of the Beaumont's rooftop suites tries to disrupt everything and everybody with the planning of his annual birthday bash. He doesn't want much--just exotic foods and flowers flown in from all corners of the globe, the chorus of the Metropolitan Opera to sing "Happy Birthday," and to-the-second timing on every single item on the agenda. It's enough to make most men tear their hair out--but not Chambrun.

But, then a high-class call girl commits suicide in one of the hotel's suites and it's revealed that she was under pressure to kill Moon. Not that anyone would weep at his passing. Moon has made a life out of destroying those who annoy him--driving men and women to suicide, ruining careers, and bankrupting his foes. Apparently he has pushed one of his victims too far because someone with a lot of money to spend is throwing it at people in the "Moon Club"...those who have a reason to want Moon dead. Now they have an added incentive (beyond their hate and thirst for revenge) of $10,000 to put themselves and all of Moon's victims out of their misery.

Chambrun doesn't care for Moon any more than anyone else and really wouldn't mind much if someone did the vicious man in, but he does care about the Beaumont and doesn't want any unpleasantness to mar its reputation. So he sets to work trying to discover the person behind the murder plot. Working with Jerry Dodds, his chief of security at the Beaumont, and Lt. Hardy of the NYPD, he helps to catch the mastermind in the act.

Not a bad beginning to the highly successful series. The characters aren't quite fully realized and Chambrun is not nearly as central to the story as he will become later in the series. I did realize fairly quickly where the plot was headed, but this was an enjoyable afternoon's read and a series that I do recommend overall. ★★★

First Lines: It was Monday. This Saturday would be the Great Man's birthday.

Last Line: Fill up the glasses, Wills, I'd like to drink to that.