A Rogue of One's Own 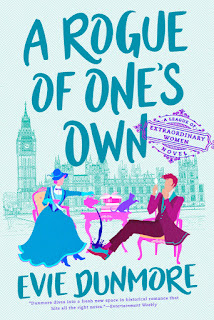 ...when a woman happened to acquire a rogue of her own, she might as well make good use of him.

Synopsis from the book:

A lady must have money and an army of her own if she is to win a revolution--but first, she must pit her wits against the wiles of an irresistible rogue bent on wrecking her plans...and her heart.

Lady Lucie is fuming. She and her band of Oxford suffragists have finally scraped together enough capital to control one of London's major publishing houses, with one purpose; to use it in a coup against Parliament. But who could have predicted that the one person standing between her and success is her old nemesis, Lord Ballantine? Or that he would be willing to hand over the reins for an outrageous price--a night in her bed.

Lucie tempts Tristan like no other woman, burning him up with her fierceness and determination every time they clash. But as their battle of wills and words fans the flame of long-smouldering devotion, the silver-tongued seducer runs the risk of becoming caught in his own snare. As Lucie tries to out-maneuver Tristan in the boardroom and the bedchamber, she soon discovers there's truth in what the poets say: all is fair in love and war...

This late 1800s historical romance is a bit of a departure for me. Even though I have a great love for the Victorian period, normally when I venture into the romance genre I tend to pick up books set in the Regency era (a la Georgette Heyer). It was a great deal of fun to read about Lady Lucie, a headstrong and determined woman (even in our first look at her in a flashback to when she was thirteen). She and her fellow strong women in the cause make for an interesting look at the fight for suffrage in Britain in the late Victorian period. The love story is typical--antagonists who find that all the sparks between them aren't anger and dislike but in reality a sign of their mutual desire. Thankfully, Lucie and Tristan are good characters that make the typical love story an enjoyable read. ★★★

First line: Young ladies did not lie prone on the rug behind the library's chesterfield and play chess agains themselves.

Last line: "Very," Hattie said promptly, and Lucie knew that the next scandal was already waiting in the wings.