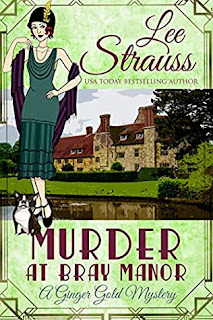 Lady Ginger Gold has just gotten her new London dress shop off the ground when she receives a plea for help from her sister-in-law Felicia at Bray Manor--it seems there is a poltergeist harassing the Dowager Lady Ambrosia Gold. Household items are moved to random, nonsensical places throughout the manor. Ginger doesn't want to leave her fledgling business, though she has hired a highly competent shop manager, but the two ladies seem truly in distress. So she and her American friend Hayley venture out to the country house to investigate.

The Gold family have a title, but the coffers are pretty bare so Felicia and a reluctant Ambrosia have opened the estate up to the public for room rentals. Various clubs rent rooms on a once-a-week basis where they may hold their club meetings and special events. Ginger becomes convinced that one of the club members is playing the practical jokes specifically to irritate the somewhat snobbish Ambrosia. She's barely begun to investigate when tragedy strikes.

On Saturday night, Bray Manor hosts a charity ball to benefit a local society in aid of wounded soldiers. Felicity has invited some of her flapper friends and her beau--a certain Captain Smithwick who incidentally has a bit of history with Ginger. Not a pleasant history at all--Ginger knew him during the war and had hoped never to see him again. She's not the only one who doesn't seem to care for the captain. One of Felicity's friends, Miss Ashton has a bit of an argument with him on the dance floor.  The next morning, Miss Ashton is found dead at the edge of the estate's large pond...with an odd puncture wound in her back. When the weapon is found to be a knitting needle that disappeared after the last knitter's club meeting, Ginger has to wonder if the "poltergeist" has now turned killer.

The local police have had zero experience with murders and seem a bit overwhelmed, so Ginger tactfully suggests that they might call in the Yard...and specifically ask for Inspector Basil Reed. She and Reed have had other mystery adventures together and she trusts him to investigate intelligently and discreetly....until circumstantial evidence points to Felicity and his duty forces him to take her in for questioning. Then Ginger has to find the real killer on her own...before her sister-in-law can be tried for murder.

This is a totally new-to-me historical mystery series set in the 1920s. Lee writes with a light touch and it has a cozy feel to it. But it does also address some heavier social issues such as the differences between the classes and the pressures that can be brought to bear...even by one's supposed friends. Ginger Gold is a fine central character and I found her interactions with her friends, family, and Inspector Read to be quite interesting. I definitely can see myself visiting Ginger's world again. ★★★