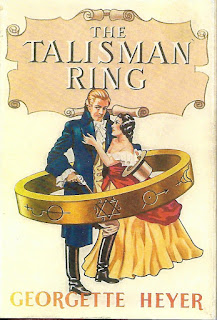 Historical romantic comedy meets murder mystery in my latest read penned by Heyer. Two years ago, Baron Lavenham's heir, Ludovic, was accused of murdering Sir Matthew Plunkett over the loss of the titular talisman ring in a rigged game of chance. His cousin, Sir Tristram Shield, helped him escape the law and Ludovic has been a fugitive heir ever since. As the story opens, Baron Lavenham is on is deathbed. It is his dying wish that Tristram shall marry his half-French cousin Eustacie before the baron expires. After meeting for the first time, neither are very enthused at the idea. Eustacie, for her part, does not believe her cousin to be romantic and adventurous enough. When the baron dies before the wedding can take place, Eustacie decides to run away and become a governess rather than marry Tristram whom she declares to be not sympathique. All she wants in life is adventure. [why she believes a governess to be the route to go for adventures is beyond me...]

Eustacie soon finds herself embroiled with smugglers...er...that is free traders. One of whom turns out to be her missing cousin Ludovic. They have to run away from Excise Men, Ludovic is wounded, and they wind up taking refuge at the Red Lion inn where a Miss Sarah Thane (who also longs for adventure) takes them under her wing. Ludovic swears that he did not kill Sir Matthew and after hearing that the baron has died is determined to find out who committed the murder and stole his precious ring. The rest of the story sees them teaming up with Tristram (after briefly flirting with the idea that he is the villain of the piece), avoiding Excise Men, searching for hidden panels, nearly being murdered in their beds...and, of course, finding the ring and the murderer. Eustacie falls in love with Ludovic--and after witty bantering throughout the second half of the novel Sarah winds up with Tristram. All's well that ends well.

This was a fun read. Heyer does period romantic comedy very well and she's one of my very favorite historical romance authors. The mystery portion is a little weak--after ruling out Sir Tristram, one really doesn't have to look very hard for the murderer, but the fun is watching the characters work their way towards capturing him rather than having an intricate puzzle to solve. I did think the hiding place for the ring was a nice touch. ★★★ and 1/2.

First Line: Sir Tristram Shield, arriving at Lavenham Court in the wintry dusk, was informed at the door that his great-uncle was very weak, not expected to live many more days out.

People who collect objects of rarity, my dear Eustacie, will often, so I believe, go to quite unheard of lengths to acquire the prize they covet. (Sir Tristam, p. 22)

Sir Tristram was contemplating with grim misgiving the prospect of encountering vivacity at the breakfast table for the rest of his life... (p 33)

"In my back bedchamber, sir," said Nye loudly. "I always house smugglers there to be handy for the riding-officers." (p. 91)

"Sir," said Miss Thane, "during the course of the past twelve hours my life seems to have become so full of smugglers, Excisemen, and wicked cousins that I now feel I can face anything." (p. 105)

Last Line: "You are in love, enfin!" she exclaimed.