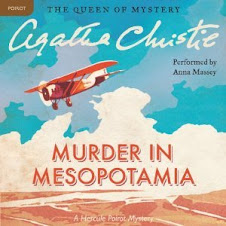 Nurse Amy Leatheran is sent look after the wife of a prominent archaeologist on a dig in Iraq. Ostensibly, she is there because Louise Leidner is run-down and nervy. But she finds that her charge is scared for her life. Over a period of years, Louise has received threatening letters from a husband she thought was dead. Each time she became close to a man, a new letter would arrive--threating her with death if she ever became the wife of anyone besides Frederick Bosner. When she fell in love with Dr. Leidner and decided to marry him, no letter arrived and she thought that either Bosner had truly died...or, if it was a nasty practical joke, that the practical joker had tired of their game. But then another arrives saying that she has disobeyed and that now she must die.

The Leidners escape to the Middle East and again everything is quiet on the letter front for a good while. Now, however, the campaign has begun again and the most recent letter was hand delivered. There have also been mysterious faces and strange tapping sounds at Louise's window and she is sure that Bosner has arrived in Iraq. When Nurse Leatheran sees the letters, she think (as she realizes Dr. Leidner does) that, for whatever reason, Louise has sent the letters to herself because the handwriting looks very like a more cramped version of the woman's own. Whether it's because a very real fear has turned her brain or because the woman is bored and needs to dramatize herself, Nurse Leatheran isn't sure.

Both Dr. Leidner and Nurse Leatheran are prove wrong though when one afternoon Louise goes to her room for a nap and winds up bludgeoned to death. The difficulty is no stranger entered the archaeologist's compound during the relevant time and there is a mere ten minute window when the killer would have been able to get to her room without passing someone in the main area. Louise's room has one door and the windows were shut--and have bars which would have prevented entry in any case. it is a definite puzzle for the local police. Fortunately, Hercule Poirot is passing through the area on his way home from Syria and it isn't long before the famous detective solve the crime (with assistance from our medical narrator).

I primarily listened to this through our library's connection with Hoopla (though I do own hard copies of it) so I could "read" this while I worked and Anna Massey does a fine job with the narration. It had been a very long time since I first read this (back in the 1980s) although I have more recently watched the filmed version with David Suchet. I couldn't remember how closely the Suchet episode followed the book (and now I think I need to re-watch because with my sieve-like memory I still don't know...).

While I think the explanation of the first murder is a little bit extraordinary and the ultimate identity of the culprit is somewhat unbelievable--for reasons that can't be explained without spoiling*, the book overall is quite entertaining. The setting is good and I quite enjoyed Nurse Leatheran as our narrator. Since she is a complete outsider, we are encouraged to trust her observations, much as we would Hastings, and it was interesting to get a feminine perspective on the investigations of Poirot. Of course, it would have been even more interesting if she had turned out to be one of the Bosners in drag (as Poirot suggests as a possibility at one point)...but having a narrator turn out to be the culprit is a trick one should probably only use once and Christie had already pulled that one out of her bag of tricks.

Christie fooled me for a good while and I had my sights set on the wrong culprit...until the last really big clue. What tripped me up was the real motive, but I don't blame myself for that. Since the ultimate identity is somewhat unbelievable for spoilerish reasons--and I would not have dreamed of the spoilerish reason--it's not a surprise that I didn't spot the real motive. ★★★ and 1/2.

*If you really must know, highlight the apparently blank area: I find it difficult to believe that Louise could have remarried her first husband (under the name of Leidner) without realizing what she had done. I don't see how he could have changed that much that she wouldn't at least feel like there was something familiar about him.

First line (forward by Dr. Reilly--who gave the case to Nurse Leatheran): The events of this 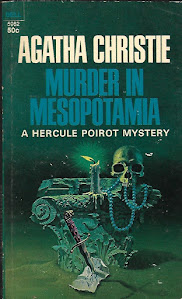 First line (Ch. 1 forward): In the hall of the Tigris Palace Hotel in Baghdad a hospital nurse was finishing a letter.

First line (of Amy Leatheran's account): I don't pretend to be an author or to know anything about writing.

Last lines: Oh, dear, it's quite true what Dr. Reilly said. How does one stop writing? If I could find a really good telling phrase. I must ask Dr. Reilly for some Arab one. Like the one M. Poirot used. In the name of Allah, the Merciful, the Compassionate...Something like that.

This will always be one of my favorite Christie mysteries primarily because it is utterly outlandish. Even knowing all her tricks who would ever guess the identity of the murderer? Somehow back in my teen days I missed this one. I think it was skipped over for a reprint for some reason. It never turned up in the Dell or Bantam paperbacks — at least in 1970s Connecticut. I only got to read it within the last ten years for the first time! I also enjoyed it for the unusual female first person narrative in a Poirot book.

John: It is fun from that point of view--outlandishness. I do like having the story told by the nurse. It might have been fun to have a few more stories told by Nurse Leatheran.