A Wind in the Door 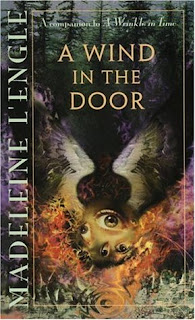 Meg Murry and Calvin O'Keefe are off on another fantastic journey. This time to save Charles Wallace and the universe. Charles Wallace is very sick--that is, his mitochondria are very sick. And Charles Wallace is one of those people in history who is so important that their existence has wide-ranging effects. If Charles Wallace dies so too will much of what is. To save Meg's brother, they will need to team up with Proginoskes, a cherubim who looks like a drive of dragons; Blajeny, a cosmic Teacher; Sporos, a farandola (a fictional part of the mitochondria); and...of all people, the despised Mr. Jenkins, school principal.

Most of the responsibility will rest on Meg--who is, in the grand scheme of things, a Namer. She has the power to give people and things the understanding of their real name. As Proginoskes tells her, once people really know who they are, they don't have any reason to hate. Hate and war give power to the Echthroi (likened to fallen angels) who are driven to un-Name everything and destroy all of creation. Meg is given three tests--through which she learns how to name, how to love--even those we don't really like, and how to overcome power of un-Naming. She draws strength from her friend Calvin and from Mr. Jenkins--who learns to value his own worth enough to make sacrifices for the children.

I can remember reading this series as a child and loving the mysteriousness, adventure, and wonder. It is very easy to lose yourself in L'Engle's world and not worry whether everything makes sense or not. She has a very sure way of combining science with religious themes that makes them all tie together very nicely and gives reader very interesting battles between good and evil that capture the imagination as well as entertain. It was great fun to revisit the world of the Murrys again and lose myself in fantasy as I did when I was young. ★★★★

First line: "There are dragons in the twins' vegetable garden."

I think your mythology would call them fallen angels. War and hate are their business, and one of their chief weapons is un-Naming--making people not know who they are. If someone knows who he is, really knows, then he doesn't need to hate. (Proginoskes; p. 97)

We don't have to know everything at once. We just do one thing at a time, as it is given us to do. (Proginoskes; p. 99)

Let us make believe that it is daytime. You can, you know. Believing takes practice.... (Blajeny; p. 131)

Last lines: Calvin's eyes met hers for a long moment and held her gaze, not kything, not speaking, simply being. Then she went up to Charles Wallace.