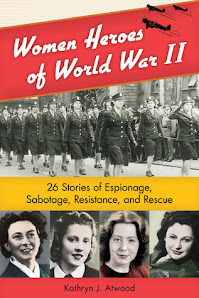 A young adult history book which gives a good solid look at 26 of the many thousands of women who aided the war and resistance efforts throughout World War II. The snapshot stories feature a vast array of women, from everyday teenagers in occupied countries who could not tolerate what Germany was doing to their neighbors to well-known figures like Corrie Ten Boom to famous entertainers like Josephine Baker and Marlene Dietrich. These women risked their lives to help Jews escape the grip of Nazis, to act as couriers for resistance and espionage groups, to smuggle downed Allied servicemen out of enemy territory, and even to manage and direct resistance forces themselves. Some women saved a handful of lives and some saved hundreds, but they all contributed all they could with what skills and resources they had.

This is a very good introduction to the work of women in the war and it should provide a good starting place for those who want to learn more. The short synopses of the background and actions of these heroic women encourages those with an interest in history to find out more. Each woman's story ends with a notation of resources where one could read more detailed accounts of their involvement in the war effort. ★★★★

Barbara, I do think you'll find it interesting.