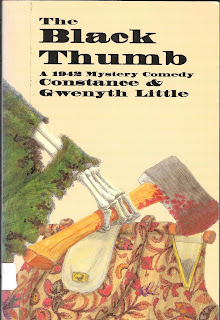 When a wicker chair is chopped up one overheated night in the hospital's contagion ward, it's easy to blame it on Jason Caddock, a vague scarlet fever patient who isn't quite right in the head and who has a penchant for escaping from his room whenever the nurses' backs are turned. But when one of his fellow patients winds up dead--looking like Agnes Dana been mistaken for a wicker chair student nurse Norma Gale isn't sure that Caddock is the killer. A bit off he may be, but she never took him for the psycho-killer type. And then when Aggie's brother William (also in hospital for German measles) is killed while Caddock was firmly locked up, it becomes apparent that there is a killer stalking among the scarlet fever and measles patients. Norma just hopes he or she doesn't start in the nursing staff next.

In order to help Inspector Shaw and Detective Phipps find the culprit, she'll be trying to figure out why William had an artificial black thumb (and wouldn't let anyone even mention it); why pools of water kept appearing outside his door and seemed to terrify him so; why Aggie insists on singing "John Brown's Body" at all hours; who is the mysterious person heard pacing in the unoccupied room; and what does this all have to do with an an odd poem and an old still found in Aggie's basement. And where on earth can that little hatchet of Aunt Aggie's be hidden?

Norma spends her time reassuring patients that "nothing is wrong" and "you'll all be fine" (pay no attention to the other patients being carried out feet first with their entire body covered), alternating being scared out of her mind and hunting for clues, being bashed on the head, and trading what's supposed to be witty comments with Dr. James Lawrence.

I have to say that either this isn't the best of the Littles' work or I just wasn't in the right mood for this sort of mystery. I didn't find the motive compelling or well set-up. And the circumstances that cause Norma to realize who must be the culprit doesn't really appear as the "a-ha" moment that it should. I didn't find the "fun" romantic banter between Norm and James to be all that romantic or fun. It all seemed to fall a bit flat for me. Other than the fact that he's described as a tall, dark and handsome doctor, I just don't see what's so appealing about him (maybe that's all you needed in the 1940s). Nor are there any events in the narrative that shed any light on what she sees in him or he in her for that matter. There's no solid basis for the bantering that goes on (if that's what we want to call it).

Norma could have been a good amateur detective and, in fairness, did have a couple of good moments--mostly when she and Linda (fellow nurse and niece to the Danas) were investigating in the Danas' house. But mostly she's just being nervous in the hospital wing and running in and out of patients' rooms looking for an ax that isn't there. I just can't recommend this as a good place to start with the Littles books. Fortunately, they're all stand-alones, so you don't have to worry about what order you read them in. ★★

Oh--and a slight spoiler. If there was any real explanation for the black thumb, I totally missed it and would appreciate someone telling me. Otherwise--what the heck?

First line: Heat pressed in through the high screened windows like damp wool and lay against my throat and face with an unpleasant smothering effect.

Last lines: "I'll let Louise marry that other James Lawrence--the one she's engaged to--and you go ahead and do what you please with me. I wouldn't want to let your mother down."

Oh no this book was going to be one of my reads this week. As such I haven't read your review yet, (planning on coming back), but noted your 2 star rating.

Do you find that mystery comedies on page work? I have yet to read one I truly liked.

Ryan: Several of the Littles books have worked for me in the humor department (but not this one). I think the best comedic mystery I've read was The Far Traveller by Manning Coles--though it's more of a ghost story mystery.