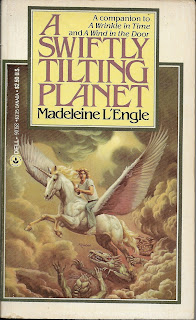 This is the third book in the Time Quintet series. And life as we know it is in danger again. This time Charles Wallace Murry is pretty much on his own against the powers of evil. He has help from an unicorn named Gaudior, an ancient rune from Calvin's mother, and the support of his sister Meg, through kything (telepathy), but it is up to him to do what needs to be done. The Echthroi (fallen angels) are still determined to bring about destruction and have placed the Earth on the brink of nuclear holocaust at the hands of the mad dictator Madog Branzillo. Charles Wallace and Gaudior make a journey through time to find a place of Might-Have-Been to change it to what Must Be if the world is to be saved.

My memories of the entire series by L'Engle are very fond--though I must admit I had far less solid memories of this one. I think perhaps with good reason. This is not nearly the adventure story that the previous two were. Honestly, not much happens. Charles Wallace goes back in time and "lives Within" various people in the past to try and figure out what has been changed. But there's no sense of adventure to the experiences he has. It's like someone telling a story within a story. All telling and no action. Even the dangerous episodes that he and Gaudiour go through don't seem all that real or problematic. And there's no satisfying explanation of what happened and what exactly Charles Wallace did to fix things. The sacrifice that comes at the end--which ought to be significant--happens almost off-stage and loses any real narrative power. Overall, a disappointing return to the third installment in this series. ★★ and 1/2.

First line: The big kitchen of the Murry's house was bright and warm, curtains drawn against the dark outside, against the rain driving past the house from the northeast.

Last line: In this fateful hour, it was herself she placed beneath us and the powers of darkness.