Fire in the Thatch 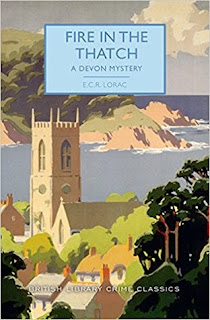 Fire in the Thatch (1946) by E. C. R. Lorac (Edith Caroline Rivett)
Nicholas Vaughan has been invalided out just as World War II is drawing to a close. The explosion of a jammed naval gun scarred him and ruined his eyesight. Once he has recuperated, he comes to Mallory Fitzjohn in Devon. He's looking to rent a place where he can do a bit of farming, raise some geese, and perhaps do a bit of renovating--if the owner is agreeable.
Colonel St. Cyres is definitely agreeable. His Little Thatch cottage has just come open and he's been looking for a tenant who loves the land as much as he does. His disagreeable daughter-in-law (staying with him and his daughter at Thatch Manor while his son is being held as a prisoner of war) wants him to lease it to a "dear friend" of hers "with pots of money" and the colonel doesn't much want the cottage to go as a rich man's plaything. Luckily Vaughan's request to look the the place over with a view to rental arrived just before June's plea. Once he meets the ex-navy man, he's certain he's found his tenant. Vaughan, in turn, loves the place and decides to take it on a ten-year lease. He wants a free hand to make it into a home and a paying proposition as he has plans to marry "before long."
After several months of tenancy and a lot of hard work, Little Thatch is shaping up to be all that Vaughan would like it to be. Then tragedy strikes one night when the cottage goes up in flames and Vaughn's body is found in the ruins. The coroner's court finds it to be an accidental death, but Vaughan former commander won't have it. He goes straight to Scotland Yard and demands further investigation because he knows that Vaughan would never have been as careless with wiring or with paraffin as the coroner's verdict makes out. His argument carries enough weight that the Yard sends Inspector MacDonald to discover if there's any truth to Wilton's claims.
It doesn't take MacDonald long to discover that Wilton is right. There's every indication that Vaughan was as careful and methodical in his wiring of the cottage and his handling of flammables as his former commander said. And there are other little details in the witnesses' statements that draw MacDonald's attention. The difficulty is to find a motive--there was a great deal of interest in Little Thatch prior to Vaughan's taking up residency. But would someone really kill the tenant and burn the cottage to ground in revenge for being done out of it? The Scotland Yard man decides he needs to answer three questions before he'll find the motive and the killer. Where did Vaughan go the night he died? Why did a man born and bred in the north of England decide to settle down to farm in Devon? And, Why does no one know who the woman is he plans to marry (not even his sister)?
Once again Lorac has grabbed my interest with her characters. Colonel St. Cyres and his daughter Anne are delightful. I wouldn't mind renting a cottage from the Colonel myself--though I don't know that I love the land enough for him to want me as tenant. All of the suspects are well-drawn and given ample space on the page to reveal themselves to us. She also paints a compelling picture of the Devon countryside. I've never been there, but I almost feel as though I have. Within the story, she gives a good look at England as the war comes to an end and town folk begin trying to make inroads into the countryside...looking for places to put up hotels and to be able to get away from London with their friends. The mores and morals of the city folk and their country counter parts are worlds apart and Lorac underlines this with her narrative.
At the beginning, the plot seems fairly straightforward but as MacDonald interviews the witnesses and gathers the evidence, we find a more intricate story developing. There's a matter of timing, coded messages, the three questions to answer, and an alibi or two to break. And a second "accidental" death thrown in as a bonus. MacDonald with his painstaking attention to detail and investigative skills is more than up to the task. Very enjoyable. ★★★★
First line: Colonel St. Cyres stepped out of the French window on to the terrace and drew in a deep breath of frosty air, conscious of the exhilaration of a glorious December morning.
Last line: "Yes, and Vaughan would have said so, too," agreed MacDonald.
**************
Deaths = 3 (one hit on head; one car accident; one shot)
Posted by Bev Hankins at 9:21 PM

Several people have recommended this author and I need to chase down some of her books!

I love the cover art of this series but some are definitely better than others so I hate to buy them indiscriminately.