I'll Kill You Next! (slightly spoilerish) 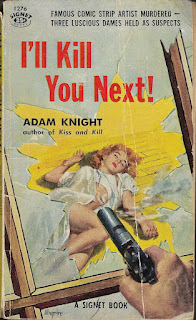 Steve Conacher has been hired by famous cartoonist Luke Yorke to track down Conacher's old friend and Yorke's protégé, Mike Smith. Yorke is an old man looking for someone to take over his comic strip and he believes Smith has the talent and skill to take up the mantle. It would have been a lot easier if the two hadn't had a falling out about a year ago, but Yorke is willing to let bygones be bygones. He wants to find someone to hand the reins over to before he dies--his current will would give control of the comic strip to his nephew and he needs to find a replacement before he changes it.

When Mike and the old man parted company, the young cartoonist stopped seeing any of his old friends--including Conacher. He just disappeared and he left no easy trail to follow. The private eye has three leads...each in the form of a dazzling dame. But when the trail leads to a cold, watery grave in the harbor of Freeville, things get personal. The locals are calling it suicide, but Mike was one of Conacher's oldest friends and he knows the cartoonist would never have taken his own life. Now the women are more than trail markers, they're suspects in what Conacher believes is case of cold-blooded murder.

One wonders if Steve Conacher makes any money as a private investigator. He gets knocked out cold four times in this book--at least once, he's laid out flat by one of the luscious ladies. His client is killed, practically under his nose, which means it's doubtful he'll get a fee from anybody. His interview methods leave a lot to be desired, consisting mostly of threatening various subjects with a "date with a character out in Mineola, the County Homicide dick" if they don't come clean with him and alternating this with slapping the suspects around and yelling at them.

On the plus side, the motive is interesting and if the detection had been a bit better it could have made a good plot. If you're looking for a fast-moving, action-packed (even if most of the action is our hero getting walloped) private eye novel, then this may be the book for you. If you prefer your hard-boiled hero to have the makings of a good detective, then perhaps not. ★★  Oh, and just so you know--that title and the blurb on the back of the book

SHE GOT WHAT SHE WANTED: She was an eye-catching dish with a low, throaty voice, and she purred like a caged tiger. As she slowly rose from the couch, she pointed the gun right at my stomach and whispered--"I got rid of him and now...I'll Kill YOU Next!"

have nothing to do with the plot. None of the dames says or does this in the actual story. None.

First line: The start of it was simple--until I met the old man.

"Your imagination demands a big, broad and flat-headed gentleman to play detective for you. Admit it girl." [Luke Yorke]; "Not quite, Uncle Luke. Maybe I'm the Ellery Queen type." [Gwen Denton] "Upper class," I smiled. "Out of my league....That would be the big time. That would be the fictional sleuting with the fat pay envelopes, the way you read about it in the two-bit novels. It never happens in real life. But even detectives can dream." [Conacher] (p. 10)

Last line: I turned out the lights and went to sleep.

Deaths = 2 (one drowned; one exposure to the cold)

A great review of an all but unknown book. I own a copy but have I read it? No, but now maybe I will!

Steve, I'll be interested to see what you think of it.