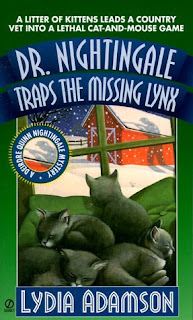 Synopsis (from the back of the book): For a rural vet, business is sparse in midwinter months. So Dr. Deirdre "Didi" Nightingale leapt at the chance to earn a fat fee by appearing at a posh local fundraiser. Six mixed-breed bobcat kittens were to be auctioned off and all Didi had to do was give the cats a clean bill of health. But when the party's host walks in covered with bloody scratches--and promptly drops dead--Didi is mystified. She recognizes the symptoms of rattlesnake venom when she sees them. And though these kittens may have a wild streak, the poison that killed Buster Purchase didn't come from any feline. Now it's time to go hunting for a two-legged species of snake.

So....if I hadn't needed a mystery that had somebody that worked with animals in it for the Mystery Reporter challenge, I never would have picked this up at the Friends of the Library bookstore. And that would have been a good thing.. The plot doesn't make a whole lot of sense. We have a pointless little thread about one of Didi's "elves" as she calls her workers/housemates trying to set up a comedy routine based on the old John Belushi samurai skit--adding a cow. (Huh?) Didi doesn't make the world's best amateur detective (not even the world's most okay amateur detective). None of the characters are really likeable or relatable. It's just a bit of a mess. And the whole "Didi's trying to get her vet business off the ground" thing? Seriously? We're ten books into this series and she's still "getting her business off the ground" and the cozy hook is that she's a vet detective? Other than giving the kittens a once-over at the auction and taking care of the paw on one of them a little bit later, she doesn't actually do any vetting.

Can't really say that I recommend this series. I don't think it would help any to have started out at the beginning of the series. This seems like a stand-alone novel and I didn't feel like I was missing anything from previous books that might have made the story any better. The flaws are in the plot and the characters as they stand in this story. ★

First line: It was a freezing January morning, but even so, at 6 A.M. Dr. Deidre Quinn Nightingale, DVM, assumed the lotus position on the cold ground.

Last line: Except for her cash flow problem, things now were really not that bad.