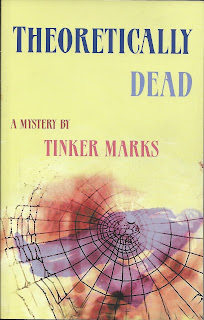 Who knew that a philosophy conference honoring the life and work of brilliant philosopher Erik Weber at Hammond College would result in murder? Certainly not Professor Claire Sinclair, economics professor, and partner to the conference's organizer, Emma Harrington. Claire had planned to give moral support and attend the opening dinner and then give the (to her) deadly dull conference a wide berth. It seemed to her that the biggest danger would be dying of boredom and she plans to plant herself in her own office to do her own work while the conference plays out.

She rapidly gets sucked into picking up conferees at the airport, tracking down special wines, and stumbling over Weber's body on one of her trips across campus. What is he doing in the middle of Iowa? He had disappeared some time ago and no one knew where he was...and he definitely hadn't been invited to the conference. While Emma has to juggle interviews with the police and reporters, Claire winds up serving as substitute host and even giving a eulogy at the man's funeral. When another philosopher winds up dead and the police seem to be focused on an old friend of Emma and Clair, our economics professor turns amateur sleuth...nearly becoming a victim herself when she has her "aha moment" and goes off to prove herself right. At least she takes a friend along for help...though she nearly gets him killed as well.

So....this is another of those books I scooped up from a used bookstore simply because it was a mystery and had an academic slant. It's always a toss-up on what I'm going to get when I go with an author I know nothing about. Theoretically Dead is...well...kind of dead in the water. It's not a horribly bad mystery. It's just....well....bland. For the most part, the characters (especially all those suspects at the philosophy conference) never really take hold of the imagination. The relationship between Claire and Emma baffles me. I can't for the life of me figure out what keeps them together. If my partner were constantly guilting me into doing all sorts of things that I didn't want to do, I'd be pretty resentful--but Claire just keeps giving in.

There are brief moments of humor and I do like the small subplot between Claire and the neighbors. Her moments with Mrs. Leach are really very nice. The motive for the murders is actually a pretty interesting one and the twist should be a good surprise for the reader. But the wrap-up is so mishandled that all the emotional force behind the motive is drained away and twist loses its power surprise. ★★ and a half--primarily for the mystery plot that could have been and the small subplot.

First line: Imagine you were on your way to a party where people would talk about things like "Conceptual Traditions in Agnostic Ontology" or "Existential Dilemmas in Cartesian Dualism."

If you read a lot of LGBTQ fiction you will learn that unhealthy relationships like the one in Theoretically Dead dominate the field. Passive aggression is a major problem in this world. It leads to many a session in a therapist's couch. I speak from experience.

I had to look up this book because it sounds the like a self-published novel. But it's not. New Victoria Publishers was based in Chicago! According to a publishers' aide website they were a "Lesbian Feminist Publisher of quality lesbian literature. We have ebooks & paperbacks." I use the past tense because the website for New Victoria Publishers is now defunct. Looks like they didn't last long.

Thanks for this, John. It's a shame that this sort of relationship dominates the field. I wish the Ellen Hart books were more a bit more effective as mysteries. I think her relationships are a bit more healthy (though there still is a bit of passive aggression, it's not nearly as bad as this one).

What a bummer. The start of your review sounded so promising.