The Sands of Windee 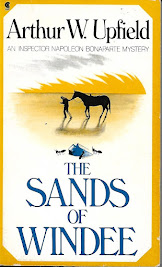 Please note that this review may use terms or descriptions taken from the work itself for those of mixed heritage. No disparagement or disrespect is intended.

When Inspector Napoleon "Bony" Bonaparte sees a photograph with the car abandoned by Luke Marks in the sands near Windee Station in New South Wales, he immediately knows that murder has been done. The local authorities believe that Marks wandered away from his vehicle, got caught in one of two recent sand storms, died, and then was covered over by sand in the second storm. But Bony defies his commanding officer (not the for the first time) and insists on going to work on a case he deems worthy of his investigative intelligence. This, he believes, is the near-perfect murder. The body is gone. Without a body, how can anyone prove murder? He shows the local investigating office, Sergeant Morris, the clue in the photograph--an aboriginal sign that indicates "Beware of Spirits! A white man was killed here."

He goes undercover as an itinerant worker, gaining employment breaking horses at Windee Station, owned by the fiery but fair Jeffrey Stanton, Sr. The job is such that he is free to ride the horses where he pleases when training them and he just happens to be pleased to ride in the area where Marks disappeared. At first it appears that other than the clue Bony noticed in the photograph, there are no other clues to be found. But the detective spends many afternoons patiently covering the area in an ever-widening circle until he is rewarded with faint signs of a struggle, a small metal disk, a single cut sapphire, and one nail from a boot. He also learns which of the local tribe members saw what happened on that fateful night, but the man is killed in an inter-tribal conflict before Bony can gain his confidence and question him. From the small pieces of evidence, he begins to build a satisfactory case save for one thing--motive. Once he has that, he'll have his case complete. But will he be happy to have solved the case?

Bony is very Poirot-like in his calm assurance in his intelligence and his status as "Australia's greatest detective." He has some justification for his assurance--to date he has never failed to solve a case. He is also much like "Papa Poirot" in his great compassion for certain types who come into his cases. It is his compassion for one of those involved in the Windee case which will create the greatest dilemma within his greatest case--having solved the near-perfect murder, will he feel able to reveal the solution?

I always enjoy these mysteries starring the unorthodox, half-caste detective. He is a charming, intelligent character whose personality overcomes his slightly outsize vanity. His ability to track in an apparently barren wasteland seems almost magical, but Upfield based this on real life--a man by the name of Tracker Leon who worked for the Queensland Police. It is interesting to watch him pick up the barest traces and weave those fragile threads into a whole cloth rendering of a mystery. I did not completely work out the solution before Bony revealed it, but I did make a good showing while on the trail of the "greatest detective in Australia." ★★★★

First line: Detective-Inspector Napoleon Bonaparte, of the Queensland police, was walking along a bush track on his way to Windee Station.

Last line: "Thank God, he's a policeman and not a scoundrel!"