Look Behind You, Lady 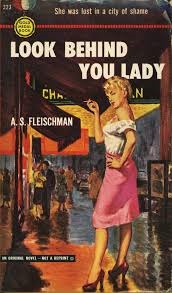 The setting: the Hotel China Seas in Macao (an autonomous Portuguese colony until 1999 near Hong Kong). Donna Van Deerlin is looking for a hero in this corrupt gambling territory and thinks she's found one in Bruce Flemish. Bruce is a magician and the headliner for the hotel's night club entertainment...and he definitely doesn't feel like a hero--especially for a dame in a mandarin collar and bangs like that. But then his boss, Senhor Gonsalves tries to talk him into pulling a fast one on Donna's escort that evening and, almost against his will, he feels himself drawn to taking her side in whatever is going on. There's talk of spies and espionage, secret codes, mysterious drawings, and an opium ring. The deeper Bruce gets, the more he thinks he's being played for a sucker. But who's playing and what's the tune? If he's not careful, it's going to be "Amazing Grace" and it'll be played at Bruce Flemish's funeral.

In this novel A. S. (Sid) Fleischman writes an action-packed, fast-moving hardboiled thriller with an atypical hero. It's not often you see a magician talking and acting like a Humphrey Bogart private eye. Bruce tries to convince us that he's not the action hero type, and in fact starts to run off on a few occasions, but he winds up doing the right things at the right times in the end (obviously, that's what being the hero is all about). This is a fun little read even if the plot is a little hard to follow--Bruce isn't sure what's going on and neither are we. But that's okay. The convoluted plot doesn't detract from the enjoyment and this isn't the type of story that would lend itself to proper clues and investigation anyway. ★★★ and 3/4. 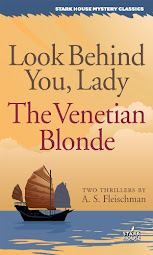 Last line: We got married.

Deaths = 5 (one stabbed; one auto crash; one shot; two blown up [grenades])

This is the first novel published in a dual-novel edition with The Venetian Blonde (will be reviewed separately).