The Trolley to Yesterday 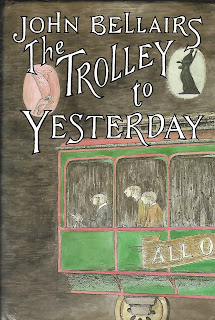 The Trolley to Yesterday (1989) by John Bellairs

Well...Professor Childermass is acting weird again and Johnny Dixon is all concerned about him. You'd think that he and his friend Fergie would know by now (it's the sixth book in the series, after all) that the professor isn't going crazy (well no crazier than normal) and isn't getting old and senile--there's just another adventure in store. But they're concerned because the professor has taken to talking to himself and leaving piles of sand on his floor.

This time, the professor has discovered a secret tunnel connected to his house with an old trolley and trolley station with ticket booth and everything. And at some point the previous owner of the house had converted the trolley into a time machine that could go to certain places at any particular time you wanted. Near these locations are Holes of Time which allow the time travel (and which explains why you can only arrive at certain locations). Professor Childermass has decided that he wants to go back to Constantinople during the Turkish invasion of 1453 and save the people who take refuge in Church of the Holy Wisdom. Armed with flares and a raft he prepares to set off and Johnny and Fergie join him. along the way they meet a talking statue or two, ghosts of the Knights Templar, and also the inventor of the time traveling trolley. Will the be able to save the people in the church and change history? Will they survive the invasion? Will they be able to get back to their time trolley and return safely to the present day (1950s Massachusetts for them)? You'll just have to read the story and find out!

Another fun entry into this series--full of ghosts, magic, fantasy, a dash of mystery, and a nicely encapsulated history lesson about 1400s Constantinople. The characters are interesting and so are their interactions. It's a very nice story for middle-grade readers and I love the Edward Gorey cover and frontispiece. I'm sure I would have really enjoyed these books if I had discovered Bellairs when I was young and I'm still able to enjoy them now. ★★★ and a half.

First line: For a long time Johnny Dixon had been worried about the professor.

Last line: But Dr. Coote broke free and dashed off down the tunnel, while the boys stared after them and laughed.

I love these books <3 Glad you're discovering them too!