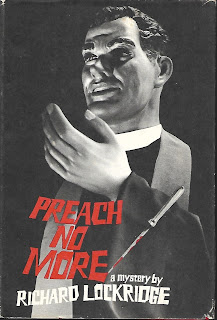 Preach No More (1970) by Richard Lockridge

The Voice, Reverend Jonathan Prentiss, a chosen man of God, has been killed. Late at night, long after his latest revival meeting is over. Not killed in church nor at the site of the meeting nor at his hotel...but killed in a booth at a rather expensive dive called (of all things) the Village Brawl. Killed in one of the dens of iniquity, full of drinking and dancing and lewd music, that he had warned his flock about just hours before. Killed with a glass of bourbon in front of him and an ice pick protruding from his back.

And when Captain Bill Weigand assigns Lieutenant Nathan Shapiro to the case, Nate once again feels like he's out of his depth. This time it's not artists or actors that he doesn't understand...it's Evangelical Christians. What on earth is the captain thinking sending a Jewish lieutenant who's been lucky a few times on a few other cases off to figure out a murder among crusading Christians?

"Satan was his enemy," Higgs said. "By all the godly he was loved." The harsh voice was emphatic, almost peremptory. It seemed improbable to Shapiro that Satan would have used an ice pick. In any event, Satan was outside his jurisdiction.

But when it comes down to it, those crusading Christians are just people and Nate Shapiro has a very good understanding of people and what makes them tick (whether he thinks he does or not).

And he has his choice of suspects. Maybe the Reverend Prentiss's wife found out that her husband liked to sample the sins he preached against--cozying up to women in each city where they held a crusade. Or maybe his brother-in-law (and accountant) was cooking the books of the ministry. Maybe Prentiss found out that his choir leader was getting kickbacks from the choir members--oh, pardon me, was accepting tithes on behalf of the mission that never seemed to make it into the coffers. Perhaps his second in command had grown tired of being kept in the shadow of the great man. Or maybe there's another motive even less obvious. Between Shapiro's understanding of people and the clues that Detective Tony Cook digs up, Shapiro will get lucky in yet another case and prove Weigand right in trusting it to him.

Shapiro strikes me as the Eeyore of the Lockridge universe. You can almost see the little doom and gloom rain cloud hovering over him He's always sure that he's not right for the job. He's positive (in a negative sort of way) that one of these days "they" (Weigand and all the superior officers) will realize they've made a mistake upgrading a cop who's good with a gun to a Lieutenant in the detective branch. He's quite certain that this time he won't be able to figure it out. You would think that so much pessimism would make for a depressing book, but I quite like Nate Shapiro and am glad that the Lockridges took some breaks from the Norths, Weigand, and Heimrich to introduce his character. Richard Lockridge wrote more about him after Frances died--perhaps because he stopped writing about the Norths.

A pretty straightforward mystery once Shapiro has a chance to talk to all the suspects. But a nice comfortable read. ★★★

First line: It was Rachel Farmer's idea, and Anthony Cook responded to it with no enthusiasm.

Last lines: Tonight, he thought, we really will go to the movie. to take a bad taste out of our mouths.

Deaths = 2 (one stabbed with ice pick; one smothered)

"Shapiro strikes me as the Eeyore of the Lockridge universe." Perfectly stated!