The Clue of the New Pin 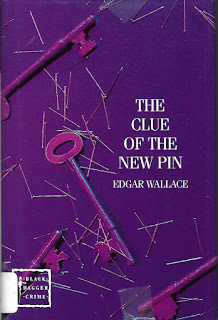 Jesse Trasmere was a hard, miserly old man. He had made most of his money in China, but had also done some profitable deals once he returned to England. He was a man of his word and a stickler for detail. If you entered into a bargain with him, you could be sure he'd keep his end up--but you better be sure you read the fine print on what he expected of you because he couldn't abide welchers. And when he exacted payment from those failed to meet their end of the bargain it was paid in blood. Literally. His nephew, Rex Lander, received a generous allowance--but not a penny more. If Rex couldn't live within his means, then he should maybe put in an honest day's work--like his uncle had to do.

He didn't trust banks and had a special vault built into his house--a vault with only one key and no one, not even the original lock makers knew which key worked because he had ordered numerous locks and told no one which one he had installed. Everyday he would spend time in the vault doing who knows what--counting his coins, gloating over his stored millions? No one knew. Not for lack of trying. His butler was a nosy sort--tried all sorts of ways to find out his master's secrets, but he hadn't succeeded yet.

Trasmere's life is a very regular one with visits to his vault at particular times, visits to collect his portion of various investments--such as part of the takings at Yeh Ling's Golden Roof restaurant, locking his butler into his room at 10:30 each night. He never takes trips or leaves the house for long. But when he gets word that a man by the name of Wellington Brown is coming to London, he tells Walters (the butler) that he will be out of town for a while and he will be at home to no one who calls before he leaves. Brown shows up early, has an altercation with Walters, and then Walters leaves the house in a hurry just as Rex Landers shows up to try once more to talk his uncle into a little advance on his allowance...And then Trasmere's body is found shot to death in his vault. The door is locked and the only key is sitting in the middle of the table in front of him. How did the killer get out with the door locked? That is the puzzle that Inspector Carver and his friend Tab Holland, reporter and unofficial assistant, must unravel if they are to prove anyone's guilt. And who might the guilty party be? Rex--impatient for his inheritance? Walters, who left in a rush and is now MIA? Maybe Wellington Brown actually met with Trasmere after all and exacted some unknown revenge? Or maybe the pretty actress Ursula Ardfern is involved somehow? And what about the Chinese men a neighbor's servant has seen hanging about?

If I remember correctly (always an iffy proposition with my sieve-like memory), this was the second locked room/impossible crime novel I ever read (the first was The Mystery of Hunting's End by Eberhart) and I was amazed at the solution. Now that I have more impossible crimes under my reading belt, it's not quite the jaw-dropper it was then, but it had been long enough since I read this one (35-ish years...) that I still didn't pick up the significance of certain clues. I did, however, figure out whodunnit even if I didn't quite know how. But, then, I don't think Wallace's goal was to keep the culprit such a deep, dark secret. There is some effort at red herrings, but they don't distract very convincingly. I think he was more interested in the locked room puzzle and the thrills and adventure of the wrap-up. Overall, a nicely done locked room puzzle from early in the genre with a lovely bit of adventure and suspense at the end. ★★★★

First line: The establishment of Yeh Ling was just between the desert of Reed Street and the sown of the that great and glittering thoroughfare which is theatreland.

Mr. Stott kept hanging to his bed-rail a heavily loaded cane. He had no intention of going nearer to May field than the safe side of his dining-room window, but the holding of the stick gave him the self-confidence of which he was in need. [p. 60]

"I have acquired a nephew since then," said Carver calmly, his eyes still upon the tape; "it is a poor kind of detective who can't discover a nephew or two. I  may fall down on a murderer, but when it comes to unearthing distant relations I am at the top of my class." [p. 154]

Last line: "I think those are all the gods I know," said Yeh Ling, dusting his finger daintily.