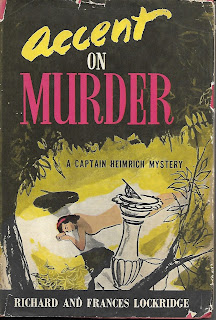 This Lockridge offering features one of their series detectives, Captain Heimrich of the New York State Police, but it also spotlights Walter Brinkley, emeritus professor of English whose hobby is the distinction of pronunciation within the United States.  Dr. Brinkley is rather a dear little man--described by his younger neighbors as a "woolly lamb"--a pink, round little man who seems to bounce wherever he goes. The book is worth the read just for the final scenes where he rushes off in a concussed state to take care of "a thing of vital importance which he should have done hours ago."  But I get ahead of myself.

When Dr. Brinkley's neighbor Paul Craig comes back to Westchester County with his new bride, the good doctor decides that he should give a cocktail party to welcome them home.  He has no idea that his sociable gesture will mix the ingredients for a rather nasty series of murders as well as cocktails.  Among his guests is Caroline Wilkins, former Navy "brat" and current wife of an often absent naval officer.  A naval officer who arrives just in time for this particular party. Also present are her lovely young cousin and beau, the Misses Monroe, and other long-time residents of Westchester County like Mrs. Belsen, the Sands, the Thayers and the like.  And Captain Heimrich.

Later that week, Caroline is dead--shot while sun-bathing in a secluded place--although not quite so secluded as she and her cousin thought.  Only a few days earlier Dorcas, her cousin, had an elderly man rant at her about the sinful nature of her au naturel sun-worshipping. Dorcas blames herself for not remembering to warn Caroline about the addled voyeur.  But Heimrich is not convinced that the elderly man is the culprit. He and Sergeant Forniss begin searching in Caroline's past and discover a former husband who just happens to be in the area and who just happens to have connections to a big scandal magazine.  But before they can decipher the meaning of these new facts, the ex-husband is dead...again from a shotgun blast and Captain Heimrich is nearly run down in the dark by the villain speeding away fromt he scene of the crime.

Meanwhile, Dr. Brinkley is quite sure that he noticed something that Heimrich ought to know.  When he finally remembers what it is, the captain and his lieutenant prove to be difficult to track down.  The villain of the piece has also remembered....and is ready to kill one more time to keep the professor from contacting the police. Fortunately, the killer's aim is off (perhaps we're getting a bit rattled by this point) and Brinkley receives buckshot in the bottom and a concussion rather than elimination.

This is my second reading of Accent on Murder since blogging began, but the first where it counts for much in the way of challenges. And it features an unusual grand finale. Professor Brinkley, bandage on head like a turban, herding the murderer to Captain Heimrich at the point of a gun. And Brinkley doesn't even know he's got the murderer...just that he's got someone who's been telling lies and needs to fess up to the police. It really is quite delicious (even though quite improbable). And I have to admit that I'm rating this one so highly this time for the pure entertainment value rather than for the mystery. Professor Brinkley is one of my favorite intermittently recurring character in the Lockridge books (in part because of my fondness for an academic bent to my mysteries).

Despite having forgotten all the details (that's what happens with a post-50, sieve-like memory), I immediately spotted the important clue and the culprit. But the plot and the characters made another reading well worthwhile and I thoroughly enjoyed myself. ★★★★

First line: Walter Brinkley, professor emeritus of English Literature at Dyckman University, typed to the bottom of page three hundred and fifty-two of "A Note on American Regional Accents" and decided that it devolved upon him to give a small party for Paul Craig and the new Mrs. Craig.

Last line: He said that, if sometime Heimrich would bring her to it, he would give another party.