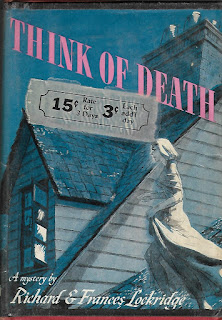 This is the first Lockridge book to feature Captain Heimrich as the sole lead investigator. He also appears in Murder Out of Turn, but Bill Weigand (who is on vacation in the country) works alongside of him and he has a cameo appearance in Death of a Tall Man. However, here the focus is still not primarily on Heimrich and his investigation. The real protagonist of the story is Marty (Martin) Brooks and the events are told from his point of view.

Brooks has just recently returned to work at his law firm after having served as a major in the OSS during World War II. He is sent by his office to the home of Freddy Upton, who happens to be the second husband of his ex-wife Ann, to advise and finalize a contract for an up-coming musical production. Upton has been a highly successful producer of theatrical works and regularly seeks backing from "angels."

From the moment he meets Upton, the major (with his war service instincts on the alert) senses that his client is over-playing his hearty host role. He's just not sure why. And when the second party involved in the contract must delay his arrival until the next morning and Upton insists that Brooks spend the night--implying that to say no would have more meaning than it should. He definitely thinks something is up. But then he watches Upton behave in the same ways to nearly everyone in the house--insisting that afternoon visitors stay to dinner (who obviously don't want to) and being overly attentive to Ann's young cousin, Doris. There is also a certain tension in the air that Brooks can't identify with any particular person. The major feels very much as if he had walked in on the second act of a play and missed vital pieces of information given in the first act.

When Upton is discovered the next morning--by Marty and Ann--lying over rocks in the brook and dead from a blow to the head, circumstances soon reveal that someone very much wants Ann...and possibly Marty too...to be arrested for murder. A forged note brought Marty to the spot. A note purportedly from Ann asking for a meeting and a note that has since disappeared. Captain Heimrich appears on the scene and Marty must decide how he's going to play it. Tell the inspector the whole truth and look like a liar because there is no note? Or tell a slightly revised version of why he was on the path near the brook and be made a liar if the the note reappears? No matter how he plays it, it's going to look bad for himself, and more importantly bad for Ann.

Once he makes his decision, he's on a race against Heimrich and the murderer to find evidence that someone besides Ann (and a certain major) had a motive and opportunity to kill Upton. A second murder follows Upton's death and things look even blacker for Ann. But then Marty remembers bits and pieces of conversations and things begin to add up...but will his calculations be complete before Heimrich decides the case against Ann is strong enough for an arrest?

I think the Lockridges were still trying to figure out what they wanted to do (of if they wanted do anything) with Heimrich. I don't think they had quite settled on his overall manner of investigation and were playing with the more suspense-heavy mystery. As an aside, I have to say that I'm not as big a fan of the suspense novels--either those done by them both or those written later by Richard alone. I don't think suspense is a strength for either of the Lockridges. This book strikes a bit of a balance between heroine-in-danger suspense and the straight mystery novel. The straight mystery elements are strong enough that they carry the book and allow me to give it a slightly higher than average rating.

It also helped that I liked Marty very much and appreciated his motives in trying to play detective. Having already read later Heimrich novels, it was a bit frustrating, however, to see the good captain sidelined, as it were. I'm sure it would have been a different reading experience had I read the books in publication order--but the earliest Heimrich novels (both this and I Want to Go Home) were not as easy to find. Overall, this is a very nicely plotted mystery. I think perhaps a few more solid motives to throw around as red herrings would have been good. If you accept the premise that Marty and Ann didn't do it (and the nice young man and the nice young woman generally don't in the Lockridge books--so this is no great spoiler), then there aren't many well-defined motives hanging about. The Lockridges did know how to write a pleasantly interesting book, though. ★★★ and 1/2.

First line: He had expected the house to be larger.

But you stubbornly built pictures in your mind, and you built them around things you knew. You did not necessarily build them around observed facts, or logical reasoning. (p 7)

It was odd, Martin thought, how vividly you remember things even after they had ceased to have any importance. (p. 10)

He had had enough of excitements during a marriage and a war; excitements which, he told himself, were alien to him, who wanted only ordinary things to happen--who wanted a little law, a little comfort and above all nothing which could not be foreseen. (p. 21)

No good policeman rejects the obvious because it is the obvious, and much less because an emotionally involved man assures him that the obvious is out of character. (p. 93)

This was murder. This was death at its most unquiet. This was something which everyone who could read would have, would demand, a part in. A light had been turned on them from which there was no escape. (pp. 152-3)

Last line: She did not finish because, for the moment they looked at each other, during the moment before they moved, there was no longer anything of any importance which needed saying.