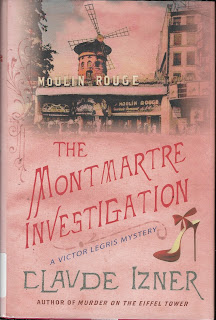 This is the third book in the Victor Legris mystery series. It is November 1891 in Paris. This time a series of murders seem to stem from an event from five years ago. The first death is that of a young girl from a boarding school who has been strangled and her face disfigured by acid. Her body is discovered on the Boulevarde Montemartre not far from the home of Noemi Gerfleur, a famous singer at the Moulin Rouge. She was barefoot and dressed in red dress. Later that day, a goatherd delivers a single red shoe to Victor Legris's bookshop--based on a paper found in the shoe with his address upon it.

When Monsieur Mori, Legris's partner, sees the shoe, he rushes off and Joseph, the shop assistant, tells Legris of the strange behavior (and the address Mori shouted to the cabdriver when he drove off). Legris finds that Monsieur Mori had gone to check on his goddaughter--a goddaughter that Victor never knew he had. Apparently the shoes were hers and she had loaned them to one of her friends, Elisa at the boarding school. More deaths follow as the rough fellow who lured Elisa away from her school friends is found stabbed and hidden in a wine barrel and then Madame Gerfleur herself is found strangled. Victor and Joseph begin investigating in earnest--in part to make sure no harm was meant to Mori's goddaughter and the clues they find indicate that there is a connection to a jewelry theft from the past. But what is the motive? Revenge for a theft? Or perhaps there was a falling out among thieves?

So...I'm continuing to regret having signed the Izner books up for a target on the Six Shooter Challenge. I mentioned in the last review that I hoped that Victor would get more interesting. Spoiler Alert: he hasn't. He's just not that great of a detective and if you're going to center an entire series around an amateur detective, it'd be nice if he were interesting to read about. He seems to stumble into all his clues and then he spends more than half his time in the book worrying about whether his lover Tasha is making eyes at all those other artists she hangs out with. It doesn't matter how many times she tells him he's the only man for her. If I were her, I'd be getting pretty tired of his dramatics.

~*And can we just stop with dramatic revelations about Monsieur Mori? I mean, seriously.*~

I would be much happier with this series if it focused on Joseph. He's a better detective than Victor and he actually does real detective-type activities [and seems to enjoy doing them]. Like following suspects. And searching through reference materials for clues. And making connections between clues. Also--this book's mystery seems to be more of an after-thought than the main attraction. We spend a great deal of time learning the facts about Mori's goddaughter and following Victor to and from Tasha's apartment...and inside Victor's head and he keeps working his way through his jealousies. It all distracts from what I thought was supposed to be the point--a mystery.

The Goodreads blurb calls this "the fast-paced and gripping third title in the bestselling Victor Legris mystery series'" [emphasis mine]. I didn't really find it to be either. We have to force our way through all the personal dramas to get to the details of the mystery. It's a real shame because the setting of turn-of-the-century Paris is a good one and I loved the idea of a bookseller as amateur detective. But his heart isn't in it...and neither is mine. I've got more of these on the TBR shelf waiting to be logged for the Six Shooter Challenge...so, cross your fingers for me that they get better. I'm not going to hold my breath, though. ★★ and a half--all for mystery plot (when we get it) and Joseph.

First line: Quick! She had to rinse her hands and remove the traces of jam.

Last line: The nudity displayed on the canvases surrounding him prompted him to hurry into the next gallery, where the sight of Charles Le Burn's Battles of Alexander the Great restored his equilibrium.

Deaths = 5 (one stabbed; three strangled; one mauled by lion)