Who Buries the Dead (spoilerish) 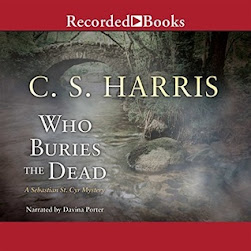 The year is  1813 and it is late at night in London. On a lonely path that leads to an edifice known as Bloody Bridge, a man by the name of Stanley Preston is found brutally murdered. His head had been cut off and displayed on the bridge. But why? And what was Preston, a wealthy man with humble roots and vaulting ambition doing in such a place that late at  night. When Sir Henry Lovejoy, Bow Street Magistrate, asks Sebastian St. Cyr, Lord Devlin to help investigate, Devlin discovers a lead strap near the bridge. It is inscribed with the words "King Charles, 1648." Does this reference to the Stuarts mean there is a political aspect to the murder? And does the fact that Preston had a collection of the heads of famous people (Oliver Cromwell, for one) have anything to do with the manner of his death?

Meanwhile at St. George's Chapel, Windsor, the vault containing Henry VIII and Jane Seymour had been opened and the workmen were surprised to find a third coffin. According to the lead strapping, it contained King Charles I. And the king's head is now missing. Then, a doctor who was acquainted with Preston is also killed and beheaded. Is there a madman loose with an obsession with heads or beheadings? What possible motive could there be for killing both men in such a brutal way?

Then Devlin learns that his former Colonel--now Lord Oliphant, a man Devlin holds responsible for the brutal murder of nuns and orphans in Spain, is back in London after serving a stint as a Governor in Jamaica. Why was Oliphant recalled and what exactly was his connection to the dead men when they all were in Jamaica? When someone begins taking potshots at Devlin and his family, he has to wonder if he's making the killer uncomfortable or if Oliphant is just trying to tidy up any loose ends from his past.

Along the way, Devlin encounters a rather insightful spinster by the name of Jane Austen. She marks some very adroit observations that help the noble investigator look at events from a slightly different angle. She doesn't solve the mystery for him, but she does shine a light on certain facts.

I would happily have given this installment five stars save for one thing. I do really get tired of authors killing off interesting characters. Harris has already killed off Russell Yates, the man who married and gave Sebastian's former lover Kat Boleyn protection from Lord Jarvis. Yates had a history of piracy and provided Sebastian with a source of information he would not normally have access to. And now we've decided to kill off Jamie Knox, the mysterious man who looked enough like Devlin to be his brother...and probably was (or at least half-brother). I had hoped we would eventually have a book that would explore that possibility more thoroughly and the interactions between the two would have been very good indeed in such an exploration. But now, if Devlin does wind up finding out the truth behind their similar looks, he will do so alone and I think the situation will be robbed of some of its impact. I can understand that we have a single hero in the novels--Devlin, but if Knox had died just after a momentous revelation of any sort, that would have been more powerful.

On the plus side, I was very glad to see Devlin get a bit of redemption in the final scenes. In general, when the killers in these novels put anyone (beyond their initial, intended victims) in danger or Devlin's involvement in the investigation seems to focus the killer's sights on additional victims, Devlin is too late to save them. This time, he and Tom are able to mount an effective rescue of a woman and her son--who have been used by the killer as bait to trap Devlin. I'm also appreciative that a way was found to deal out justice to Oliphant--of a type that seems particularly appropriate to the kind of man he is. I did want him to be the murderer...but this works just as well.

It is always a pleasure to see Harris accurately use real people and events (with just a tad of poetic license) in her stories. It was especially pleasing to run across Jane Austen and her family in Who Buries the Dead. Davina Porter's reading of the audio novel gave voice to an Austen full of wit and insight such as we would expect from the author of Pride & Prejudice.

The mystery is very well done in this one. Plenty of red herrings and some nice twists on the clues that lead down unexpected paths. I also enjoyed the further developments in Devlin and Hero's relationship. Whether such an equal partnership would really have existed in Regency England is questionable, but it is very nice to see them love and respect one another's strengths and gifts. (If Harris kills off Hero in some future installment, I'll not forgive her) A very strong entry in the series ★★★★ and 1/2.

Last line: "I want you," he said his throat tight with emotion as a gust of wind shuddered the trees overhead and sent a scattering of leaves spinning down to lie pale and shriveled against the cold dark earth.