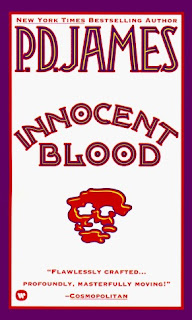 Innocent Blood is a story of identity and obsession. Phillipa Palfrey was adopted by a well-to-do family when she was eight years old. She is an intelligent young woman, bound for Cambridge. She has always had everything she could want and everything she needs--except a sense of who she really is. She has no real memories of her life before becoming a Palfrey, but as soon as the Children Act of 1975 made it possible for adopted children to find out who their birth parents were (or at the very least, their birth mother), she knew she would want to find out. And as soon as she turned eighteen, she put in her application to do so.

She has grown up with a fantasy straight out of the 1800s--that her mother was a poor servant and her father was a wealthy man who couldn't acknowledge her. But what she finds out after she gets her birth certificate and goes back to the house where her parents lived is nothing like fantasy...it's more of a nightmare. It's no spoiler to tell you that Phillipa was born Rose Ducton--the daughter of a man and woman who were tried for the rape and murder of a twelve year old girl. Her father died in prison, but her mother is still alive and due to be released on parole. Phillipa decides to spend the summer before taking up her place at Cambridge with her mother--finding out who she really is. When contacted, her mother is agreeable to the arrangement and Phillipa takes a flat for three months that they can share while they get to know one another.

Meanwhile, there is someone else waiting for Mary Ducton's release. Someone who has waited nine years. Norman Scase is the father of Julia Scase, the girl the Ductons killed. He and his wife had kept track of their daughter's killers and had promised themselves that they would kill them when they got out--just as they had killed their girl. Martin Ducton, not being able to take life in prison, had robbed them of their revenge, but Mary would not escape. Mavis Scase, Julia's mother, has also died in the interim and Norman vowed that he would complete their plan himself.

The bulk of the story follows Phillipa as she learns that there are several layers of truth to her identity and her mother's version of the events which led to her prison sentence. And she learns that there are reasons why she remembers very little of her life before adoption. In a parallel story we learn the depth of Norman's obsession as he tracks down the women and lays his final plans to kill Mary. This is not a strict whodunnit--it is more of a will-he-do-it? It is most definitely an examination of the motivations behind every action whether it be murder, manslaughter, revenge, or a search for truth. This is not a pleasant or happy book--though the ending does offer some hope. But it is a good character study and a reminder to be careful what you wish for...you just might get it. ★★★ and 1/2.

First line: The social worker was older than she had expected; perhaps the nameless official who arranged these matters thought that graying hair and menopausal plumpness might induce confidence in the adopted adults who came for their compulsory counseling

Last line: And perhaps to be able to wish him well with all that she could recognize of her unpracticed heart, to say a short, untutored prayer for him and his Violet, was in itself a small accession of grace.

Deaths: 3 (one strangled; one natural; one suicide by overdose)

A good solid job of reviewing, but it's clear that this not my type of crime novel. I'll pass, but thanks!

Steve--yeah. I read all the P.D. James books as they came out back in the 80s (including this one--which I didn't have much memory of and decided to revisit). It winds up this isn't as much my kind of book as her Dagliesh mysteries. Not even sure I'd like them as much now.