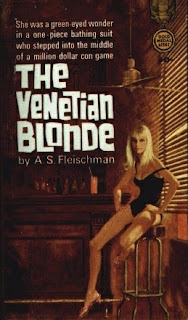 The Venetian Blonde (1963) by A. S. (Sid) Fleischman
Skelly is a man on the run. He's spent his career as a high stakes card sharp, but his last round on the East Coast put him on the hit list of a Boston money man by the name of Braque. Skelly's magic fingers let him down and he's in debt to Braque to the tune of $125,000. Hands that were steady as a surgeon's now shake anytime he's got cards in his hands and someone across the table.
Of course, he didn't just have $125,000 laying around, so he took it on the lam before one of Braque's hired guns could take the debt out of his life's blood. His escape route took him over the border to Mexico and back and now he's down to his last forty bucks and hiding out in Venice, California. He's looking for a friend by the name of Rinny Jim--a man who owes him $500, which should be enough to tide him over for a bit. There's no sign of Rinny, but Skelly runs into the man's wife Evangeline. She's running a con of her own, playing medium and promising to bring back the nephew of a very rich woman to the tune of a million dollars. She needs help and thinks Skelly looks like a likely partner. Skelly's not too keen on this type of con--but his cut would get him out of trouble with Braque and still leave a tidy sum for Skelly. He calls himself Dr. Appleby and they're all set to make the grab on the old lady's pocketbook.
But...there's this blonde that keeps following Skelly around. What's that about? And then people keep winding up dead. Fortunately, it's not Skelly and the hitmen haven't found him yet. But he's getting kind of nervous about the number of people who are dying...just who is getting conned on this job anyway?
This novel by Fleischman seems to be a bit more popular out on the internet...but I have to say it just didn't grab me in quite the same way as Look Behind You, Lady.  I absolutely bought Bruce hooking up with Donna at the end of that book. I just don't get the blonde in the bathing suit in this one. To my mind she's totally unnecessary to the story and yet we have Fleischman naming putting her in the title. It's a big distraction trying to figure out why she's so important--other than to walk off into the sunset with Skelly at the end of the book. The story also seemed to be a lot more brutal despite the fact that we had people blown up with grenades in LBY,L (after all, that was all part of the spy/opium business). Here, the character that does most of the killing is just a psychopath who seems to get a kick out of murder and that's way more chilling. Not my standard cup of tea.
I did appreciate Skelly's character. He may be a card sharp, but he's an honest card sharp. And he has a code of ethics (peculiar, granted) that he won't break. He manages to keep his code intact through the end of the book...just. ★★ and 1/2.

First line: A young blonde with wet hair sat in her bathing suit at the bar.

Last line: The tide was coming in and we kept walking.

Deaths = 5 (one hit on head; one stabbed; one heart attack; one drowned; one shot)

This is the second novel published in a dual-novel edition with Look Behind You, Lady (reviewed separately).