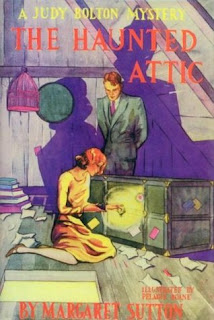 The Haunted Attic (1932) by Margaret Sutton

The second in the Judy Bolton series. After the flood in the first book wiped out their home (as well as many others in the town of Roulsville), Judy and her family move into a new home in Farringdon. The house was previously owned by a family with thieves among their members and the mother (and leader of the gang) was killed in the house. It's said that she haunts the place and many strange lights, weird noises, and even a ghostly specter have been seen and heard. Judy and her brother Horace aren't afraid of the rumors--and plan to root out the truth behind the "ghost."

Some of the items stolen belonged to Lorraine Lee's family. Lorraine is a wealthy, popular girl at the new high school that Judy will attend and is someone she hopes to be friends with. She will face some difficulties with that--Lorraine is jealous of Judy's friendship with Lois Farringdon-Pett (Lorraine's best friend) and suspicious of her friendliness with girls who attend the mill school. But Judy hopes that an investigation into the ghost will also help her track down Lorraine's family heirlooms and that her wish to be friends will be granted.

Judy and her brother Horace begin finding clues in the apparently haunted attic that explain the noises, lights, and even the white "ghost" that has appeared at the window. But it is Judy who discovers the secret hiding place of all the stolen items and arranges for the Chief of Police to be on hand at her Halloween party--just in time to catch the "ghosts" who are responsible for the haunting. There is also a sub-plot involving Peter Dobbs, Judy's childhood friend who has never known the truth of his parentage. Judy manages to sort that out as well.

There is a lot to like about the Judy Bolton mysteries. She is a down-to-earth girl detective and perhaps a bit more realistic than Nancy Drew. She isn't nearly as well-to-do and she ages with her books--from high school through a marriage later in the series. As with all these early young adult mystery stories there are a lot of coincidences and a lot of interweaving of the plots, but very enjoyable and fun to read. One thing that I didn't care much for in this one was Judy's preoccupation with being liked by the fashionable set at school and Lois's treatment of Judy over the Halloween party invitations. Honestly, if you've already promised a friend to attend their party, then any future invitations should be turned down--no matter who they're from. On the other hand, Judy does have an extreme reaction to Lois in return. Of course, this sort of high school dramatics is a thing, I know--though not a thing I ever understood. Fortunately, it's all smoothed out in the end. Just as the stolen items are found and the bad guys are caught and the mysteries are explained. Good clean fun and light entertainment.★★★

First lines: "You could take a few of the pictures, Judy. You always admired them so."

Last line: "Even detectives have to sleep," he said, "but, Judy, girl, don't think for a minute that your Dad doesn't appreciate what you've done for Peter and Lorraine and all of us."

Deaths = 3 (one shot; one auto crash; one natural) [more than one would generally expect in a vintage girl detective mystery]