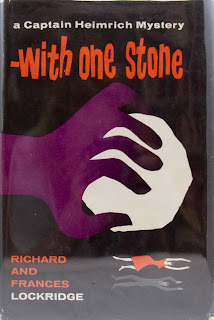 With One Stone (1961) by Frances & Richard Lockridge

Captain M. L. Heimrich is on his way home from his honeymoon when he learns that the wife of a couple he and Susan saw in Palm Beach has diedback home in Van Brunt. She was found in a huddled heap at the deep end of the drained swimming pool and it looks like she stumbled and fell to her death. But then Sergeant Forniss and his men find the jagged, bloody rock discarded in the undergrowth. Heimrich is interested in the news reports, but is quite sure that Charley (Sergeant Forniss) can handle it in his absence. But then James Bedlow, millionaire and owner of the New York Chronicle newspaper, joins his wife Ann in death and the powers that be hurry Heimrich home to take charge. Ann's death was meant to look like accident; James' death was meant to look like suicide. Both are murder.

There's evidence in the guest house/pool cabin of an intruder. Did Ann stumble across someone on her last walk? But then her half-brother gets involved in the plot and maybe he did her in because he needed his inheritance. But why kill her husband? Then the half-brother gets killed--so, yeah, the murderer's not him. Maybe it's the weird gardener who sleeps in the toolshed. Or maybe one of the daughters needed their inheritance? But no, James Bedlow was a very generous father and nobody was in money troubles. But...Norm Curtis, who runs Bedlow's newspaper, is an old flame of Ann's. Maybe he killed her because she wouldn't run off with him and then killed James because he knew? And...actually, there's way too many maybes and not enough evidence. But Heimrich and Forniss pick up tidbits here and there in conversation and start tracking down leads. It isn't long before they spot discrepancies in stories and a motive that a jury will buy.

Maybe I was just really on the ball with this one, but as soon as our villain walked on scene, I knew they were it. And--trying not to throw in spoilers--it seemed to me that the Lockridges were shining a little spotlight on the star performer. They made rather a point of a certain thing and I thought they were being much too obvious about it. That's the negative points for me. On the plus side, it was very nice to see Forniss and Crowley have a chance to shine. Forniss was really doing very well before his Captain was recalled to New York and definitely wasn't taken in by the attempts to hide murder behind accident and suicide.

A pleasant day's read and a pretty good plot--and if the spotlight isn't shining quite as obviously for you as it was for me then it's possible that the red herrings might lead you astray. ★★★

First line: There is a time to do things thoughtfully, with a kind of tenderness, because they can never be done again.

Last lines: People are simply not to be trusted. They desert dogs.

Found you over at Cloak & Dagger. That last line made me laugh a bit. People can't be trusted (because) they desert dogs? Bwahaha. Sometimes, it's fun to read predictable mystery books too. :)
~Lex (lexlingua.co)

Thanks for visiting, Lex!

Yes--that last line is from the point of view of Colonel, the Heimrich's Great Dane. :-)