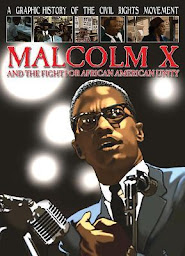 Synopsis (Goodreads): The story of Malcolm X, one of the most charismatic and controversial leaders of the civil rights movement, is one of courage conviction, and personal growth. His father, an outspoken civil rights activist, instilled in him a sense of pride. After his father's murder, Malcolm got into trouble and landed in prison. There, he joined the Nation of Islam. After his release, he worked continuously to promote the rights of African Americans while his own vision of civil rights evolved. A dream of unity and brotherhood replaced his early willingness to use force. Sadly, assassins cut short his life before his dream was achieved.

This graphic novel provides a condensed, highly accessible synopsis of the life and work of Malcolm X. It makes his story interesting and easy to understand for young readers who want to learn more about the civil rights movement and those who influenced it. ★★★★