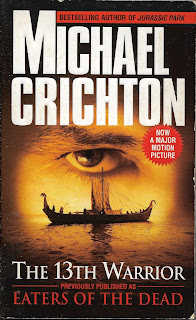 The 13th Warrior (1976; originally published as Eaters of the Dead) by Michael Crichton

Set in the tenth century, Crichton uses the an account of an actual journey made by Ahmad ibn Fadlan to the land of the Vikings and weaves that account into the tale of Beowulf. Ahmad ibn Fadlan is sent by the Caliph of Baghdad on a mission to assist the king of the Volga Bulgars. But before he can complete his mission, his party encounters a group of Northmen. The Arabian courtier is a keen study of other men and their ways and he and his group stay awhile with the Vikings. This proves to be his undoing because while staying with the men from the north, an emissary and kinsman of Buliwyf arrives telling the great leader that he and other his warriors are needed to help defend the kingdom of Rothgar from the creatures that attack under cover of the black mist. It winds up that, according to Viking custom, the correct number of warriors for such a hero's quest is thirteen...and the thirteenth warrior must be a foreigner. Buliwyf, to Ahmad ibn Fadlan's dismay, chooses the refined representative of the Caliph as his thirteenth warrior and refuses to take no for an answer.

Our narrator soon finds himself traveling and living with these men--men who are dirty and have the most appalling customs. Just when Ahmad resigns himself to dealing with one disgusting custom, like drinking incredible amounts of mead, then another custom is presented to him. He is disgusted by the wanton sexuality, their rites for the dead--including human sacrifice, and their raucous parties at the most inappropriate (to him) times. He has great difficulty understanding their humor and is incapable of producing adequate jokes or songs when called upon to do so by his fellow warriors. But by the time the tale is done--Ahmad is drinking, wenching, and fighting the Wendols with the best of them.

Crichton does a terrific job weaving the journal of Ahmad with the Beowulf story to create a new narrative. He gives the story an air of truth or "truthiness" through pedantic footnotes which, as he tells us in the afterward to the 1992 version published under the title The 13th Warrior, fooled even him when he went back to the story after a few years.

When I was writing, I felt that I was drawing line between fact and fiction clearly....But within a few years, I could no longer be certain which passages were real, and which were made up; at one point I found myself in a research library trying to locate certain references in my bibliography, and finally concluding, after hours of frustrating effort, that however convincing they appeared, they must be fictitious.

My only complaint would be that by doing so, he robs the events of some of its narrative force. The journal-like narrative is written in much drier style than that of his more straightforward fiction. It was more difficult to lose myself in the adventure when Ahmad was constantly inserting "I saw with my own eyes..." rather than just getting on with the story.

On the other hand, the style does lend itself to a comparison of customs and mores of two very different peoples. It was interesting to read of Ahmad's reactions to the "barbaric" Northmen and to see how, as he became more accustomed to them and lived among them, he found himself falling in with their ways over time. It is an incisive commentary on how different need not be scary or wrong and the more you engage with differences, the more you come to understand others. 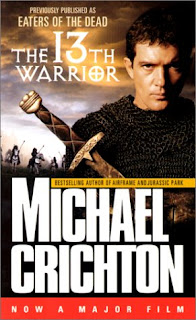 I thought this was interesting experiment with story-telling--taking a legend and attempting to strip it down to what might be the kernels of truth upon which the old story may be based. Crichton starts with the assumption that there must be some events which prompted the original storyteller to create the legend of Beowulf and Grendel--and Grendel's mother. A very interesting read even though it is not quite as exciting as a pure action-adventure.  ★★★★

First line: Praise be to God, the Merciful, the Compassionate, the Lord of the Two Worlds, and blessing and peace upon the Prince of Prophets, our Lord and Master Muhammad, whom God bless and preserve with abiding and continuing peace and blessings until the Day of the Faith!

Last line: "Now it happened..." This is, of course, the purist historical accident, but every translator has commented upon the odd appropriateness of the abrupt ending, which suggests the start of some new adventure, some new strange sight, that for the most arbitrary reasons of the past thousand years will be denied us.