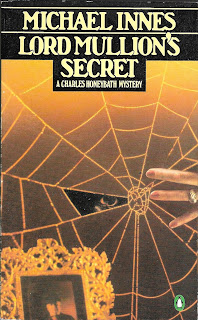 Lord Mullion's Secret (1981) by Michael Innes
Charles Honeybath, portrait artist and sometime amateur sleuth, agrees to paint the portrait of Lady Mullion, wife of his old school friend. When he arrives at Mullion Castle he finds himself caught up in the lives of his friend's rather eccentric family. There is dotty Great-aunt Camilla with her mysterious midnight wanderings and hints of a secret in her past. There's Lady Patricia and her love of gardening...and possibly the gardener's boy who has such a way with flowers. There's the younger Lord Mullion--Cyprian and his careless ways and Lady Lucy ("Boosie"--seriously?) with her egalitarian notions.
And then, of course, there's the odd happenings. Great-aunt Camilla had quite a passion for painting herself at one time and some of her work is displayed here and there around the castle. But after Honeybath gets a peek at two of them, they suddenly disappear and are replaced by completely different paintings. And when Honeybath is shown a trio of valuable miniature portraits of three of the Mullion ancestors, he notices that one of those has been replaced with a modern reproduction. What exactly is going on at the Mullion estate?
Well, of course, Lord Mullion has a secret. Only it may not be the Lord Mullion you think. Nor may it be the secret that you think it is. And, who knows, it may not even be Lord Mullion's secret that we need to find out about. Honestly, it's hard to consider this much of a mystery at all. Sure, there's the theft of the miniature and the family secrets to unravel, but all-in-all there isn't much in the way of crime. The theft is explained (and rectified). Honeybath has a good time ferreting out secrets, but in the end, it's the vicar and the doctor who reveal all. If Michael Innes's writing weren't so good, I doubt I'd give this the ★★★ that I'm assigning to it. The family interactions are fun and watching Honeybath follow the trail of secrets is interesting. But as a mystery it does lack a certain something.
Kate at Cross Examining Crime and Peggy at Peggy's Porch have also reviewed this one. Click the links to see what they thought of it.
First line: The Mullions were still quite comfortably off, although they no longer managed to pay their way in the entirely unobtrusive fashion they would have wished.
Lord Mullion in fact knew more about Honeybath's pictures than Honeybath did about Lord Mullion's family. (The pictures, and particularly the portraits, were on annual display; the Wyndowes didn't much go in for public occasions.) (p. 10)
I've been sitting to a chap not a mile away. Is "sitting" right? He did me standing, as it happens. It made me feel so much like my own butler that I expect to have a thoroughly butler-like appearance in the finished portrait. (Lord Mullion; p. 12)
Thus did Charles Honeybath, much like a detective in the latter part of a mystery story, turn hither and thither the swift mind (as Homer says) while surveying a field full of suspects. (p. 72)
Something quite unaccountable and absurd had just happened; and it had happened hard upon something else which, if not absurd, was very unaccountable indeed. He had a dim sense that these two unaccountabilities were related, although he couldn't conceive how this might be so. (p. 77)
Great-aunt Camilla....Never married, and that's no doubt what made her a bit difficult in middle life. But since going out of her mid she's been no trouble in the world. Or only now and then. (Lord Mullion; p. 16)
Last line: "Mary," he said, "that young man is very much to be congratulated. And now you and I must get down to thinking about our portrait."
*******************
Deaths = one of natural causes
Posted by Bev Hankins at 10:49 PM

Yes this was lacklustre read for me too, though I imagine you liked it more than me. Innes and me have never really got on, despite many attempts.

Kate--yes, if I didn't like Innes overall, then this definitely would have gotten a lower rating. I've read two Honeybath novels since I started blogging and neither have fared as well as the Appleby stories. I remember reading some of the Honeybath books when I was younger and liking them more than I seem to now.