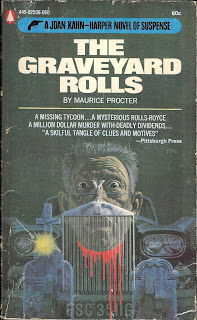 The Graveyard Rolls (aka Moonlight Flitting, 1963) by Maurice Procter

Sam Glover calls up the Grantchester City Police and tells them that his father is missing. Normally there wouldn't be quite such an immediate reaction to a man missing less than half a day--but Luke Glover is a millionaire, a city councilor, and a member of the Watch Committee. He's also missing in a sage-green Silver Cloud Rolls Royce which is hard to lose. When the car is found abandoned but no sign of millionaire, Chief Inspector Martineau and his men follow slender clues to a graveyard in Grimwood. In the graveyard, they find Luke Glover's body...on top of the ground. Soon the case is littered with coincidences--was everybody in the Glover family in Grimwood that day? Not to mention traces of blackmail, faked alibis, and even a hint of big-time crime.

Martineau has plenty of suspects to investigate as well--from the victim's much younger, pretty wife to the son and nephew who inherit much of his business to the long-lost brother who may still hold a grudge for past wrongs. There's also the family of drifters who were holed up in the abandoned house near the graveyard and who may know more than they're telling. The biggest question Martineau must answer is what was a millionaire doing in an out-of the-way graveyard? Glover had told his secretary that he'd be away on "a personal matter," but what personal business could a millionaire have in a graveyard that houses none of his family or friends?

In comparison to my previous experience with Procter (Two Men in Twenty), this one is a mixed bag. It's still a fine police procedural--Procter's experience as a policeman serves him well and the story bears all the hallmarks of authenticity when it comes to details. The difficulty with Graveyard Rolls is that there are too many details. It feels like there is just too much going on, especially when he brings in the big-time "gangster" and a parallel plot about stolen transistor radios (that may or may not have to do with our central murder). There is a solid motive and mystery plot that nearly gets buried under all the extras and the wrap-up has a cluttered, almost disjointed feel as well. It all makes sense in the end, but it takes some very careful reading to get it all clear in the end. ★★★--just.

First line: At eleven o'clock on the night of Tuesday the twenty-sixth of September, Sam Glover decided to make a telephone call.

...coincidence was something  which Martineau always viewed with deep suspicion. When men and events had a connection, he looked for a reason. (p. 19)

Devious murderers had no place in Clay's long memory and wide experience. He believed in going after the obvious suspect, and ninety-nine times in a hundred he would be right. (p.110)