The Bride of Newgate 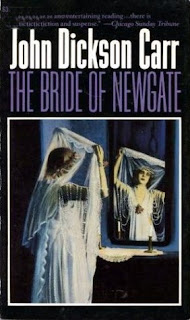 Dick Darwent has been tried for and found guilty of murder--having been accused of having the gall to kill a nobleman in a duel. Of course, in the early 1800s dueling was perfectly okay--for the gentry. But for an untitled nobody to kill one of his betters...that can only mean death at the end of a rope. He's due to be hanged in just a day's time. Lady Caroline Ross is a head-strong young woman nearing her 25th birthday. She's used to having her way and has vowed never to become the chattel of some man--she's also due to come into an inheritance from her grandfather. Provided she's legally married before she turns twenty-five. Lady Caroline comes up with a daring plan--to convince the condemned man to marry her before facing the gallows. The letter of the law will be fulfilled and she will never have to submit to a husband's tyranny nor see her inheritance become his under the law. Desperate to leave a something for actress he believes he loves, Darwent agrees to do the deed for 50 pounds (enough to keep the actress for a whole year).

But fate has a different ending in mind. As the war with Napoleon comes to an end, Darwent's uncle, the Marquess of Darwent, suffers died of a heart attack and his two cousins (all that stand between him and the title) were killed in battle--just the day before the supposed duel took place (more on supposed in moment)--which means that Dick's trial was illegal. At the time he was tried, he was in truth a nobleman and should have been tried in the House of Lords--if at all. News reaches Newgate just in time to save him from the scaffold and commute his trial to the House of Lords. Well, needless to say, Lord Darwent is found not guilty and his release finds him to mete out justice to those who put him in Newgate in the first place.

You see...Darwent claims that he never fought a duel, but was set up in an elaborate scheme. He and his lawyer, Mulberry, and a few loyal servants work hard to find out who the "man in the graveyard cloak" was who drove a ghostly carriage that carried Darwent to a house with a dead man in it. Meanwhile there are others who seem out for Darwent's blood--he'll be forced to duel in truth and will have to fight his way out of murderous riot at the opera house. There's also the mystery of the missing room to solve. And all the while he's also trying to determine whom he really loves...his actress Dolly or his current wife, Lady Darwent--a woman who seems to him to care only for the money she has now inherited and yet...there's this attraction between them that he cannot ignore.

I've said in the past that I haven't enjoyed Carr's historical novels nearly as much as I have his Gideon Fell and Sir Henry Merrivale mysteries. And when I first started this one, I was sure that trend was going to continue. But once we got Darwent out of prison and started him off on the hunt for the cloaked coachman, I was hooked. The adventures along the way to the solution are very enjoyable. Mr. Mulberry seems to me to be a somewhat less boisterous combination of Fell and Merrivale. He does have a few quirky exclamations (just as the other gentlemen do) and he does have a way of seeing all the nuances of the mystery that no one else can. The solution to the mystery of missing room was well done and I have to say that Carr played quite fairly. When Mulberry details the clues that were sprinkled along the way (and that he saw and this reader did not), I was forced to admit that I missed a great many of them. The best of the historical mysteries I've read by Carr to date. ★★★★

First line: The hanging of Dick Darwent, outside the debtor's door of Newgate Prison, was to take place on the following morning.

Last line: And with her hand on his arm, their eyes raised and their faces smiling, they went down the front steps into the dawn.

Deaths = 4 (one stabbed; one fell from height; two natural)

how interesting to be reading 70 year old historical fiction.

It does give an interesting twist to the idea of historical, doesn't it?