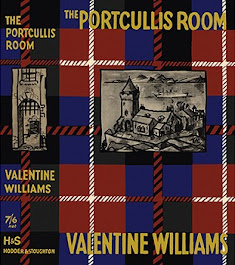 The Portcullis Room (1934) by Valentine Williams

"It was a dark and stormy night." No, really--it was. The narrative doesn't exactly use that dramatic cliché as an opener, but it is definitely implied when American millionaire Stephen Garrison and his entourage arrive at the Scottish Castle Toray by boat only to be stranded there by a wild storm. Garrison is hoping to buy the castle, though his financial manager, Philip Verity, is skeptical about the project, and his girlfriend, Phyllis Dean, is actively opposed to the idea. "Toray" McReay, the laird of the castle, would rather not sell--but he has no son left to inherit and, because his son Ronnie got himself into money troubles (repeatedly) before being killed while serving in the French Foreign Legion, he could really use the money. His daughter Flora is absolutely against selling and gives the Americans a rather chilly reception.

Things get even more tense when an "old friend" of Ronnie McReay shows up with a gaggle of tough guys. Vicomte Raoul d'Arrene is not unknown to Garrison. They had a run-in at Monte Carlo where the American knew the Vicomte as a cardsharp and scoundrel. Apparently d'Arrene has some kind of hold over Toray, perhaps evidence of whatever drove Ronnie to the Foreign Legion, because when Garrison tries to warn his host about the Vicomte and his "friends" Toray refuses to to do anything to upset them even though it's obvious that they make the laird very uncomfortable.

During a tour of the castle, Toray tells his guests about the legend of the Portcullis Room. The room was originally the bedroom of the chief of the McReays. But generations ago during a storm on Michaelmas, Hugh McNeil, a member of a family with whom the McReays had feuded for years, was forced to seek shelter at Toray Castle. According to customs of hospitality, the chief offered his protection and gave the man his own room for the night--the Portcullis Room. But come the next morning McNeil was found stabbed to death with the laird's own dirk. The laird, his oath of protection broken by someone in his household, then drowned himself, but guilt was never satisfactorily assigned. No one uses that room as a bedroom in modern times. And now...Michaelmas is just around the corner and a nasty storm is brewing once again.

It should surprise no one that someone is found killed on Michaelmas. It probably won't surprise anyone that it is the Vicomte who is found dead and that once again the victim has been stabbed with the laird's dagger. It might surprise you that tough-guy Oscar Berg appoints himself as chief detective while the island castle is cut off from the officials. At least...until the laird appoints Verity to conduct the investigation. But of course Berg's purpose seems to be to hang the crime on Garrison. Garrison believes that Toray--or someone working on his behalf--is guilty. And Verity has suspicions about Flora, the daughter of the house. Is it one of these or the loyal major domo Duncan? Or maybe Jamieson, the laird's financial advisor? What about Berg himself or one of his men--maybe they wanted to cut the Vicomte out of any deal they were trying to pressure Toray into.

All the hallmarks of a cheesy B-movie mystery are here. We have clearly marked bad guys and people flitting around in the dark on a stormy night--no one seems able to stay put in their own bedroom (not even the captain of Garrison's yacht seems able to stay on the boat). We have loyal servants with near-unintelligible accents. There is a bit of romance. There are secret passages, secret identities, and secret papers. It all makes for a great deal of fun and a good, atmospheric mystery. There are clues to be had--if the reader is clever enough to spot them. I, for one, did not pick them all up and misinterpreted those I noticed.★★★ and 1/2 for an enjoyable read.

Rick at The Mystillery and Curtis at The Passing Tramp have both reviewed this one. Click the links to see their thoughts.

First line: As they cleared the harbour mouth of Port Phadric on the mainland, Hans, chef of the S.Y. Ariel, was putting on the fresh herrings to grill for breakfast.

Last line: The way the colour mantled under the roseleaf of her cheeks was like a seagull's wing glinting pink against the sun.