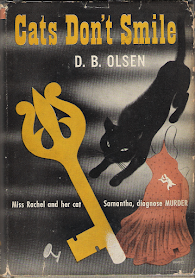 If cats could grin. Samantha was probably grinning. ~Cats Don't Smile (1945) by D. B. Olsen

Miss Rachel and Miss Jennifer Murdock's cousin Julia asks them to come stay at her house while she goes away on business. Julia has two boarders and she doesn't want to leave them alone in the house. Miss Rachel reads between the lines and suspects that something has happened to alarm Julia...who knows of Rachel's penchant for investigating mysteries. So all of Rachel's senses are on the alert for oddness when they arrive.

There were to be elements as grotesque as the memory of Father's hymn singing: the Breather, who stood sighing and invisible in the Hurgraves living room; the lotus key which opened no door but Death's; the girl who tore up morning glories and the man who played minuets at midnight.

The first odd thing is that Julia has already left when Rachel and Jennifer get there. This, to Rachel, is a sure sign that something is wrong...Julia never could stand trouble of any sort. The boarders are a couple of odd ducks as well. There's Mr. Somplessis with his oily smile, his knowing air, and his tendency to play a minuet on the harmonica at midnight. And there's Mrs. Parmenter who is an overly made-up, blonde nurse to the patriarch of the neighboring Hurgraves. Mrs. Parmenter is secretly engaged to one member of the family while openly flirting with her patient.

The real trouble begins when Mrs. Parmenter is found strangled and there seems to be some connection to the missing husband of Mr. Hurgraves's step-daughter Rheba. Rachel suspects that the man is dead and that Mrs. Parmenter was working with her fiancé to prove it. Was Mrs. Parmenter killed to prevent the truth from coming out? If so, then her fiance, Bob Grennel (cousin to the Hurgraves) should be next on the killer's list...but Grennel doesn't seem to be on the hit list. Could Miss Rachel's instincts be leading her astray?

This is another fun entry in the Rachel Murdock series. Our spry, elderly sleuth is in full swing (if not hitting homers every time) and eventually puts the clues together to spot the killer and their motive. However, she nearly winds up being their final victim. Good thing she had Captain Fuller of the police hiding under the grand piano while she talked to the suspect.... I thoroughly enjoy these mysteries featuring our spunky heroine--her sister Jennifer tries to keep her out of adventure, but Miss Rachel is having none of that sitting at home in our rocking chairs business. She's curious as a cat and is lucky she doesn't meet the fate of curious felines.

Speaking of felines, the covers of these stories make it seem like Miss Rachel's cat, Samantha, is taking part in the detective work. She does provide some of the action (and is far more involved than, say, the cats in the Mr. & Mrs. North books), but she doesn't detect. She does, in a way, alert Rachel to the first murder and she provides  a distraction that allows Rachel to avoid being discovered when she's detecting where she shouldn't. And...in the grand finale, Samantha jumps on and scratches the killer when they're trying to dispose of Rachel. A fine performance by Samantha...and Miss Rachel. ★★★ and 1/2.

First line: Miss Rachel Murdock, aged seventy, looked at her own nose in the hall mirror.

I have never trumped up anything. I have smelled out some horrors that were already well hatched. I have sicked the police on a few criminals. They were all criminals before I arrived on the scene, or at least potential criminals. You act as though I'd coached them. (Rachel Murdock; p. 23)

Without any twinge of conscience--or, rather, none that she could not ignore--she put the postcard and the cuff link into the pocket of the sprigged dimity. (p. 77)

I discovered a long time ago that the best thing to do about a murdered person is to try and find out who killed him. Or her. It's so much more informative than fainting. (Rachel Murdock; p. 47)

...Miss Rachel felt as though an oversize mental meal had been stuffed into her mind and that it was proving difficult to digest. (p. 126)

I mean that the police are never quite nosy enough about trifles, inconsequential things. They go in for obvious clues like fingerprints and bullets and plaster casts, and they usually get along quite well. But some cases--this one, for instance--need, I feel, the study of stray and seemingly unrelated things like Mr. Somplessis' music and a postcard and--and a link. (Rachel Murdock; p. 148

Last line: "I wouldn't miss them for the world."