Who Speaks for the Damned 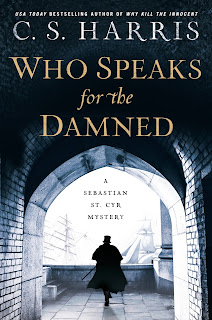 Murder is unseemly. Making certain a killer doesn't get away with what he has done is an obligation we the living owe to the dead--no matter how unsavory we consider them to be. ~Who Speaks for the Damned (2020) ~C. S. Harris

Who speaks for the damned? In this particular historical mystery series--Sebastian St. Cyr, Lord Devlin. And in this particular case, he is speaking for Nicholas Hayes, the younger son of the late Earl of Seaforth, who was tried and found guilty of murder 18 years ago. His sentence was commuted to transportation to Botany Bay for life and he had been reported dead after an accident not long after his arrival in Australia. But, in truth, he had escaped and made a life for himself in China. So, why was he found stabbed in the back with a sickle in a less-than-fashionable tea garden? Devlin's valet Calhoun would like his master to find out.

Calhoun was friends with Hayes before he was exiled from England and believes that the man was innocent of the murder of the Countess Chantal de LaRiviere. He says that Hayes was a loyal and honorable man--perhaps a bit wild in his youth, but certainly not a killer of women. Devlin trusts Calhoun's judgment and has an abhorrence of senseless death. There is also a young child to be found--a child whom Hayes had brought with him from China and who disappeared as soon as they had told the valet of the murder.

It isn't long before Devlin has discovered four men who had reason to fear Hayes's return to England. Men who were inextricably tied to Hayes's guilty verdict. Could it be that Hayes came back to exact revenge on those whom he thought had set him up? Or is there another reason behind his return--a reason that resulted in his death? When Hayes's cousin (who had ascended to the title Earl of Seaforth on the strength of the report of Nicholas's death--and the deaths of his two older brothers) joins the list of those killed, Devlin begins to wonder if someone has a grudge against the Hayes/Seaforth family. Or is he missing something?

In the background, the crowned heads of Europe are still gathered in England to celebrate the defeat of Napoleon and the powers-that-be want nothing more than to sweep these ugly matters under the rug. Heaven forbid that unseemly events (like murder) should tarnish the aristocratic glamour of the elite. But as long as Devlin is around, murderers will get their comeuppance...even if they do walk among the elite.

For those of us who enjoy a good historical mystery, there is much to love in the Sebastian St. Cyr series and I must say that this is my current favorite. Harris (Candice Proctor) has earned degrees in history and her knowledge of the Regency period is extensive. Each book is well-researched and manages to integrate actual events with a lively mystery. Of course, as all historical fiction writers do, she takes some liberty with dates and such, but the basics of Regency England (and Europe) are solid and give readers much to learn about the era. Her characters are well-written and most of the recurring cast have become old friends (or old enemies depending on how you feel about Lord Jarvis and his ilk). Settling into these novels is like settling back into a comfortable armchair that sits just right--of course her plots are loaded with surprises so we never get so comfortable that we fall asleep. She also offers up good mysteries with plenty of red herrings, possible twists, and clues. This particular plot offers up a few old scandals to choose from before we get to the end. ★★★★ and 1/2

First line: Alone and trying desperately not to be afraid, the child wandered the narrow, winding paths of the tea gardens.

Last line: Then she reached out and felt the woman's hand close protectively around hers.

You certainly make this series sound appealing, Bev! I'll have to give it a try.

Gretchen: It is a good one. Start at the beginning if you can--there's a background story that builds throughout the series. Each mystery can stand alone, but you'll get spoilers on the over-arching personal story if you read out of order.