The Illusion of Murder 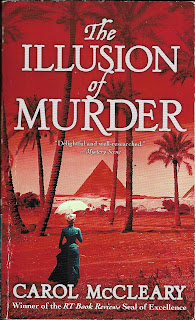 The Illusion of Murder (2010) by Carol McCleary

From the secret journals of journalist Nellie Bly comes a story of mystery and intrigue that begins in Egypt and ends on a train speeding across the American Midwest. Nellie is on awhirlwind trip around world--determined to beat the 80 days standard set by Phileas Fogg in the Jules Verne novel. When she visits a bazaar in the city of Port Said, just before going through the new Suez Canal, she witnesses the murder of a man--a man in local garb, but with telltale white skin beneath the enveloping robes and a British accent. The man, whom Nellie identifies as a fellow passenger by the name of Cleveland, whispers the name Amelia before dying in her arms. Unknown to Nellie at the time he also slips a scarab into her pocket.

Her fellow passengers, including a British lord who has served in the Foreign Office, insist that Nellie is mistaken and the ship sails without anyone being much concerned about Mr. Cleveland--who supposedly told Lord Warton that he was leaving the ship at Port Said. But Nellie smells a mystery and two attempts on her own life prove (at least to her) that she's right. As she continues to gather clues that point to an international intrigue, she wants to be able to confide in someone, but there doesn't seem to be anyone she can trust. The most likely confidante is Frederick Selous (the hunter who served as a model for H. Rider Haggard's Allan Quartermain) but he continually gives her reason to doubt him. Not to mention he and Warton keep discrediting her observations and experiences.

Despite making several wrong guesses along the way, Nellie manages to unravel the plot and do a great service to the British throne along the way....Oh, and she beats the 80 day travel record as well.

This a meticulously researched historical novel which blends the actual writings of Nellie Bly with fiction to produce an interesting mystery that is firmly grounded in history. Nellie is a vibrant character and McCleary brings her to life and surrounds her with interesting characters--both from actual history and fictional additions. The descriptions of the historical period and the locations along Nellie's journey are beautiful and capture the atmosphere well. An enjoyable historical mystery. ★★★ and 1/2.

First line (Prologue): I discovered that Egypt is a land of both mystery and magic, an exotic place where trees talk and men turn staffs into snakes, so it should not have come as such a surprise that death would also be mysterious in this ancient, haunted land of pyramids, mummies, and the eternal Nile.

First line (Chapter 1): Thirteen days after I left New York, the Victoria, the ship that will see me all the way to Ceylon in the Indian Ocean, anchors in the bay at Port Said, the gateway to the Suez Canal.

Had he asked, I would tell him that he'd have more success keeping his own affairs from public scrutiny if he acted less like a nervous squirrel hiding nuts. (p. 15)

[in reference to a man's enormous handlebar mustache] It always amazes me to what great lengths men go in order to portray a certain look. And they say women are vain. (p. 23)

The devil oils my tongue and makes me do these things, but it feels good, at least for the moment. (p. 451)

Last line: I have people counting on me to finish the race and that is exactly what I'm going to do.

This book sounds intriguing. It's going on the TBP (to be purchased) list.