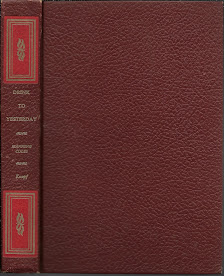 Drink to Yesterday (1940) by Manning Coles
The story opens with a coroner's inquest on the body of a garage owner in Hampshire. He was found shot through the temple by his cleaning lady and the main question seems to be: Suicide or Accident. The police and the coroner both rule out murder as even a consideration. After a bit of a wrangle with one of the jurists, a verdict of "Death by Misadventure" brought in. Just as the the court adjourns, a woman shows up claiming to be his wife (nothing was known of the man's relations prior to this) and wishing to claim his body. Fade out....and off we go to flashback.
Michael Kingston is a bit uncomfortable at school. He likes being alone more than in large groups of boys and might like some of his fellow students if he had a chance to interact with them on his own terms rather than being stuck with them at all hours and and at any time. He's muddling along when Tommy Hambledon comes to teach them for a bit. Hambledon notices Kingston's aptitude for languages and tells him that if he takes up bookkeeping and modern languages (as opposed to classics), that it might come in handy some day.

There are other ways of making yourself useful to your country besides fighting, boy.

So, Kingston, who has come to admire Hambledon, follows his advice.
When World War I breaks out, Kingston, who is underage, longs to join up. He eventually does--using  the name Bill Saunders and claiming an age which he has not attained (so much easier in those days...). When his unit captures some Germans and Kingston's language skills are noticed once more, he finds himself sent to the War Office where he is asked if he would like to help the war effort by going under cover in Germany. Without thinking about it at all, he says yes and finds himself once again under Hambledon's tutelage.
He enters Germany as Dirk Brandt, nephew to Hambledon's Hendrik Brandt. Hambledon is already established as a Dutch importer and now he has brought his nephew into the business. The two have quite a career in Germany--befriending a top-ranking German intelligence man by the name of von Bodenheim, foiling a German plan for super-Zeppelins, killing a scientist suspected of breeding cholera for germ warfare, and the eventual murder of von Bodenheim himself. Once the war is over, Kingston returns to England...where his past catches up with him in a little village in Hampshire.
Small spoiler ahead.....
This is the first book in the Tommy Hambledon series--which is odd, really. This is much more Michael Kingston's story than Hambledon's and...Hambledon apparently drowns near the end of the book. [Spoiler alert: He doesn't really. There are 24 more books.] The book also seems to be (and internet scuttlebutt seems to indicate that it probably is) somewhat autobiographical in nature for the Cyril Henry Coles portion of the writing duo who made up Manning Coles*. Coles also lied about his age when he enlisted in World War I and wound up working for the War Office, was a master of languages, and worked behind German lines. It is an extraordinary look at the lives of undercover agents and the toll it must take on them. It shows Hambledon and Kingston as very human men with very human foibles--they do some great work for the British, but they also make mistakes and affect ordinary German citizens in ways that can scar both sides...and have consequences years later. It is both an exciting spy thriller and at times a depressing reminder of the toll war takes on everyone. I don't know if Coles planned that message, but it's definitely there. ★★★★
*Co-author = Adelaide Frances Oke Manning 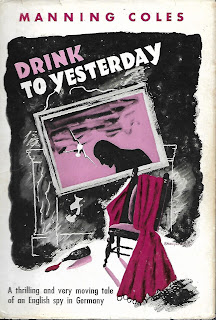 John at Noirish, Rick Mills at The Mystillery and Rehka at The Book Decoder have reviewed this as well. Please see links for their reviews.
First line: The coroner's inquest was opened at the Dragon Inn, Lime, in Hampshire, at 2.30 p.m. on Saturday, July 19, 1924, the first witness being Mrs. Lomas.
But I think war is just beastly, Kingston. To go out and kill people you don't even mildly dislike is just madness. (Dixon Ogilvie; p. 27)
Last line: She said that the deceased man employed her daily for domestic work...
*****************
Deaths = 6 (five shot; one stabbed)
Posted by Bev Hankins at 1:01 PM

This was a pre-blog read and it is one of the many I should get around to re-reading. I managed to enjoy it despite the fact I read books 1 and 2 the wrong way round!

Kate: Yes, I first entered the Hambledon world with They Tell No Tales (if I remember correctly). Diving in at random points doesn't seem to hurt the reading experience.