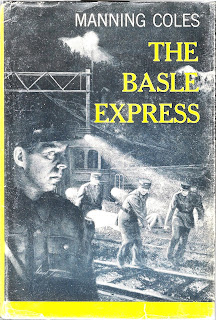 I think life is sometimes a little unfair. Here am I being harassed by a gang of thugs because they think I have got the papers and getting rockets from my Department because I have not got the papers and all the time I have not the faintest shadow of an idea where they are. ~Tommy Hambledon; The Basle Express (1956) by Manning Coles

Tommy Hambledon, one of Britain's finest intelligence agents, is off to Innsbruck for a much needed holiday. But before he gets there he must take the Anglo-Swiss Express to Basle. He finds himself sharing a sleeping compartment with Edouard Bastien, journalist and model ship hobbyist. In the middle of the night, Tommy wakens to hear a man threatening Bastien over some papers. When Bastien unadvisedly lets the man know he recognizes him, the journalist winds up dead from a gunshot to the head.

Tommy winds up helping the Basle police investigate a bit and finds out that the plans in question are stolen secret plans for an American guided missile. Whoever had the plans (and Bastien took them from) is intent on finding them--plundering the train car, Bastien's baggage, and attempting to get into his apartment (the police actually beat them to the punch there). But neither the police nor Tommy can find evidence of the plans. Once he has helped the police all he can, he decides to continue his journey to Innsbruck. But the nasty organization from whom Bastien had taken the plans now believe that he passed them on to Tommy and they set off in hot pursuit. Tommy and his soon-to-be friend Lombard find themselves on the track of a deadly organization that specializes in secrets and high-profile thefts. They'll have to be on their toes to escape death, capture the bad guys, and prevent the plans from falling into the wrong hands.

I do have to say that Tommy does not appear to be at the top of his game in this outing. From the moment a certain thing was introduced into the narrative, I knew where the secret plans were. When that same thing was brought to Tommy's attention the first time, I thought at him, "Hey, dude. Guess where the plans are?" Nope--Tommy didn't have a guess. When the thing was brought up again, I thought for sure he'd get it. Finally. Nope. It wasn't until a loud-mouthed English woman discovered the plans where I knew they'd be and then announced it to him in the middle of the street that Tommy got it. Unfortunately...so did the bad guys hanging about on the same street, [I had a brief moment where I thought the loud-mouthed English lady was a female spy in disguise and had finagled a look at the thing in order to see if the plans were there. Nope. Just a loud-mouthed tourist...who somehow knows exactly what missile plans look like so she can announce to everyone in a six block radius.]

He also allows everyone from Lombard, member of the Austrian Special Police, to the various bad guys to get the drop on him--even to the point of stripping him naked and leaving him in the German/Austrian forest. Of course, Lombard doesn't fare much better (he joins Tommy in going au naturale), but if I hadn't come across Tommy Hambledon in other books, I'd be wondering how on earth he got such a sterling reputation as a British agent. What I find fascinating is that Tommy, who couldn't see the hiding place for the plans when it was waved right under his nose (twice!), somehow manages to spot a trail of coke chunks in the middle of the forest. A trail that will lead to a final showdown with the bad guys--a showdown where Tommy will shine as the hero we know him to be.

All that said--this isn't a bad book (really!). It's quite exciting and adventure-packed. There are some really good characters along the way and many of the scenes are very well done (when the Russian tracks down members of the organization who lost the plans, for instance). I also enjoyed the way Lombard and Tommy worked together and their final trek through the forest--first in their birthday suits and then in their gunny sack togas--is well worth the admission price. ★★★ and 1/2.

First line: The Anglo-Swiss Express, loaded as its name suggests with the travelling English, leaves Calais at twenty minutes to seven in the evening and rumbles through the night with only five stops on the way, to reach Basle at six in the morning.

Last line: He turned to go in; with a yelp of joy Lombard sprang past him and vanished into the decent obscurity of the cave.