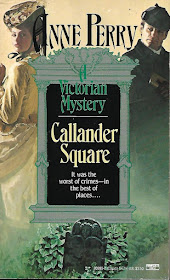 When a couple of gardeners beginning digging to add another plan to the garden in the exclusive Callander Square, they discover the tiny remains of two infants. Inspector Thomas Pitt is called upon to discreetly investigate and finds himself running into roadblocks among the socially superior residents of the square. Even their servants are reluctant to given any help to the police and no one will admit knowledge of any unwanted pregnancies. His sister-in-law, Lady Emily Ashworth, finding herself a trifle bored with the standard rounds of social calls, decides that she can put her rank to work and help Charlotte's policeman out. She very cleverly elicits gossip and rumors--illicit relations between the well-born and their servants and extracurricular activities among the gentry as well. Soon she and Charlotte devise a way for Charlotte to go undercover in one of the houses on the square--providing organizational assistance to General Balantyne who is writing a family history. Between the bits and pieces discovered by Charlotte and Emily and his own investigations, Pitt soon puts together a trail that leads to blackmail and ultimately to the killer, but not before there are more deaths.

This is my second re-visitation to the world of Thomas & Charlotte Pitt. I may not have been baffled by the first one (having remembered all the details--even twenty years later), but I have to give Perry credit for keeping the criminal hidden this time. Apparently this one didn't imprint itself upon my memory quite as solidly--and, truthfully, I didn't find the story quite as compelling as that in The Cater Street Hangman. Not that it isn't a good one--it is still very entertaining, but it didn't quite meet the promise of the first.

We do see a bit more of Pitt in action and I think his appearances are balanced nicely with the efforts of Charlotte and Emily. I don't feel like we get quite the insight into the other characters what we did in book one--perhaps because there are more of them. We learn quite a bit about the Balantynes--probably because both Charlotte and Emily spend a great deal of their time in that household. But we learn much less about the others. Only Reggie Southerton receives as much attention.

Overall, an entertaining mystery and I was glad to revisit it after all these years. ★★★ and 1/2.

First line: The autumn air hung mild and faintly misty and the grass in Callander Square was dappled yellow with fallen leaves in the late afternoon sun.

They frighten me very much, not just murder, but all the other dark things it stirs in even those who are barely involved in the first crime. It seems so often one crime begets another. People do strange things to cover guilt. We can become so cruel and selfish when we are afraid. Murder and investigation reveal to us so many things about each other which we would rather not have known. (Charlotte Pitt; p. 80)

Last line: More than anything else, he desperately wanted to go home.