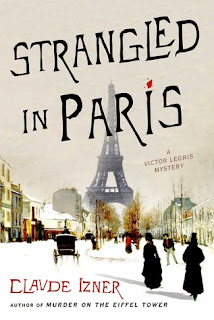 From the book's cover: The coast of Normandy, France, 1894. A mysterious young woman is rescued by an anonymous man after a deadly shipwreck. In Paris, a few months later, the body of a well-dressed woman in a velvet mask is found in the abattoir district of La Villette in Paris. Next to the brutally strangled corpse a drunk watchman--who witnessed the crime but was too terrified to intervene--finds a pendant featuring a black unicorn. Newly married bookseller Victor Legris is asked by an acquaintace to solve the murder of Louise Fontane, but he is initially baffled by the case. Louise was poor, so where did her finery come from? And what is the significance of the black unicorn?

Within days, two more murders startle Paris--both victims were well-respected and seemingly wealthy, both have been killed in a similar fashion, both men's apartments have been defaced and ransacked, and both were members of the Black Unicorn Society, an organization bent on finding the philosopher's stone. Victor and his assistant (and brother-in-law), Jojo, struggle to draw the connections between the murders. And they struggle to keep their sleuthing from their wives, who frown upon their interest in mysteries. As their secret investigation progresses, they discover that in bell époque Paris, young girls with no money or background are as ruthlessly preyed on as ever they were....

Well...that's done. And a good thing too. I've finished the last of six books by Izner that will allow me to complete my commitment for the Six Shooter Challenge. And that's pretty much all I've got to say about that. This historical series ought to have a lot going for it--set in Paris at the turn of the 19th C. Interesting background and a well-done descriptions of the city. But--it all falls flat. Every single time. This particular entry seemed to have even more extraneous people and storylines than usual, confusing the issues and definitely not propelling the story along.  And Joseph isn't even very appealing as an investigator this time.

There are also a few things I've grown tired of over the course of this series.

~Victor and Joseph lying to everyone in their lives about what they're doing. Every time they go off to investigate something, they tell their girlfriends--now wives, their bookshop partner, their mother, etc. that they're off to see a potential customer or someone who had a fabulous set of books to sell...Do they really think that no one notices that they don't sell any more books than usual or that they never come back with any of these fabulous books to add to the shop's stock?

~All the inept and complaining women--Joseph's mother; Micheline Ballu, the concierge of the building where the bookshop is; and the new house maid for the apartments/bookshop. It gets on my nerves.

There are six more books in this series...I can say with great certainty that I won't be reading them. ★★

First line: The storm was battering the Normandy coast.

Last lines: He's putting his paw over his ear! That means it'll rain before the week is out.

Deaths = 5 (one strangled; three hit on head; one natural)