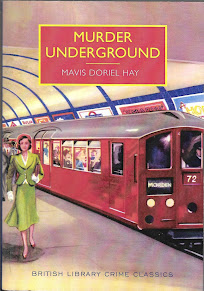 Synopsis (from the back of the book): When Miss Pongleton is found murdered on the stairs of Belsize Park station, her fellow- boarders in the Frampton Hotel are not overwhelmed with grief at the death of a tiresome old woman. but they all have their theories about the identity of the murderer; and help to unravel the mystery of who killed the wealthy "Pongle." Several of her fellow residents--even Tuppy the terrier--have a part to play in the events that lead to a dramatic arrest.

There are several suspects--from her nephew Basil (who seems to go out of his way to appear guilty) to the fiancé of her niece to the young man whom Miss Pongleton found mixed up in a recent robbery. A lot may depend on the lady's most recent will--she had a habit of writing a new one whenever her nephew got in her bad graces. And does anyone know what happened to her pearls?

Thoughts As I Read:

~Trying to figure out why Basil, Miss Pongleton's nephew, goes to Mr. Slocomb for advice. I mean, would you go ask advice from some gent who boards at the same boarding house as your aunt just because she supposedly mentioned his good sense? I wouldn't. I'd go to my own friends and associates.

~Motives are a bit slapdash. The most obvious one is Basil's--but since so far we're following Basil about, I assume his obvious motive isn't the real one. Looks like it will be a case of an innocent who looks decidedly fishy needing to do some amateur sleuthing to keep himself out of jail.

~Basil really is a blithering ass. In the style of a very stupid Wooster without a Jeeves to get him out of trouble.

~I can't say I've really taken to any of the characters. Basil would be okay if there were any sort of steadying influence in his life (like a Jeeves) and I would like things to turn out okay for him and his Betty. But honestly the way these characters go about making muddles, they get on one's nerves. I think perhaps I'm not in the right frame of mind for this type of nonsense at the moment.

~Have already spotted the real culprit. No idea of a motive yet--but (and this is a sign that the story is dragging) have peeked at the end (which I rarely do) and I am right. Now I just have to soldier on through all the daft goings on with Basil until we stumble upon X's motive (and so I can claim the book for a challenge, otherwise I think I'd throw in the towel on this one.).

~Almost at the half-way mark--lots of talk (chatter, chatter, chatter), very little action. Very little actual detection. Inspector who interviewed the residents of the boarding house (off-stage, so we haven't even met him properly yet) has disappeared entirely. Only police presence is the man with big boots who is shadowing Basil. I do like a detective novel to have detecting going on--whether by the official police or amateurs doing their best.

~Now everybody's getting involved in various antics--none of which are really investigating, mind you. Just hiding pearls and looking for wills and making up stories to replace other stories.

~Finally! We have an amateur rushing off to investigate something. Hurrah! Things are picking up. Still not exactly the finest detective novel I've come across, but inching closer to the okay mark.

I have to say that I much preferred Hay's holiday-themed mystery, The Santa Klaus Murder, and hope that Death on the Cherwell will be a return to standard (and a good academic mystery in the bargain). The entire first half of the book is exasperating. But it goes a fair way to redeeming itself in the last half. There we have plenty of running about and looking for clues. We have several members of the Frampton house digging up and providing clues that the police couldn't find. Of course, it's no surprise that they couldn't find the clues, since the police weren't really there for about two-thirds of the book. The ending is superb and a very nice take-off on a drawing room comedy with actors popping in and out all over the place. Final rating: ★★★

First line: Dozens of people must have passed the door of the Frampton Private Hotel--as the boarding house where Miss Euphemia Pongleton lived was grandly called--on a certain Friday morning in March 1934.

Last line: So we will leave Betty and Basil to their reminiscences as they swing across the Heath in the sunshine.