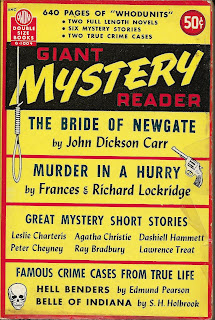 Murder in a Hurry (1950) by Frances & Richard Lockridge

Pam & Jerry North get mixed up in another "screwy one" (to quote Sergeant Mullins) when the young woman whom Jerry is considering for a job illustrating a book about cats becomes involved in the murder of J. K. Halder, eccentric multi-millionaire who is, incidentally, the father of the man Liza O'Brien loves. Liza is a talented young artist and had been sketching the Norths' Siamese cats, Gin, Sherry & Martini. She also planned to sketch a small black kitten in Holder's small pet shop. But when she arrives at the shop (as previously arranged), it's closed up. She's about to leave when Felix Sneddiger, an elderly friend of Halder's, shows up too, is mystified by the shop's darkness, and lets them in with a spare key. They find Halder dead and bundled up in one of the animal pens.

Sneddiger seems overcome by the sight and Liza goes in search of brandy to help him--when she comes back. He's gone. Not knowing what else to do, she calls Brian Halder (her beau and J. K.'s son). He tries to keep her out of it by sending her home and making an anonymous "squeal" to the police. But it's no good. Liza manages to leave her sketch book behind and Lieutenant Bill Weigand immediate recognizes the Siamese cats on its pages. When Sneddiger turns up dead as well--in one of the closets in Halder's house, it becomes apparent that the killer is one of the family circle...and it all hinges on what happened at the family dinner the night Halder was killed. But according to the family nothing out of the ordinary happened at all. Are they all lying?

This was a reread for me--but since it's included in the Avon Reader (and I need the whole book for a challenge) I went ahead and read it again. I always enjoy the Lockridge books no matter how many times I read them. For more thoughts on the story, see the link above. ★★★★

First line: It is an inconsiderable street neither long nor wide, and it is appropriately modest.

Last line: "The nice thing about an evening with the Norths," Pam said, her voice very low, for Jerry's ear, "is that it's so stimulating."

Deaths = 2 (one poisoned; one strangled)

"Lida" (1947) by Leslie Charteris: Lida Verity was frightened. Frightened enough to ask her friend Patricia and Simon Templar to meet her at the Quarterdeck Club. But the Saint arrives too late to save Lida from whatever--whomever--frightened her and now he must find a murderer...and possibly more.

"The Mystery of Hunter's Lodge" (1925) by Agatha Christie: Poirot is down with la grippe (influenza) when Roger Havering comes to ask him to investigate the murder of his uncle at Hunter's Lodge in Derbyshire. Hasting's goes to act as Poirot's eyes and ears in the case of the mysterious man in a black beard. The beard is probably a disguise, but is it the only one?

"The Gutting of Couffignal" (1924) by Dashiell Hammett: The Continental Op is hired to guard some wedding presents on the small, exclusive island of Couffignal. There is, of course, a robbery. But is the robbery a cover for something else of a far more desperate nature?

"Twenty Dollar Debt" (1940) by Lawrence Treat: A young man who never got any breaks and has only known how to steal, plans one more job. But fate has a way of intervening in the lives of men and he may get more than he bargained for.

Deaths = one hit with axe; one shot

"The Smiling People" (1946) by Ray Bradbury: All Mr. Greppin wanted was a little peace and quiet, and maybe a smile or two from his family. But things get a little weird and are both way too quiet and way too loud...and then there are the bodies.

"It Comes Off Sometimes" (1951) by Peter Cheyney: Miss Varne wants to hire a private detective because she's worried about her guardian, but she talks to Callaghan just a little too late--or maybe that should be too early?

"Hell Benders or The Story of a Wayside Tavern" (1926) by Edmund Pearson: Pearson prefaces his story of a Kansas family who had a nasty way with their guests in the 1870s with a short piece defining two basic types of serial killer long before police profilers every took up the business.

"Belle of Indiana" (1941) by Stuart H. Holbrook: Had it not been for an unfortunate hired man and a fire, it might never have been revealed that Belle Gunness had gone on a murder spree for insurance and matrimonial purposes.