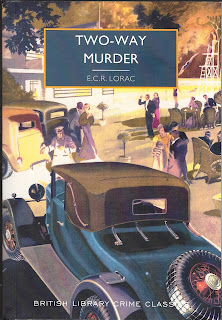 It is the night of the annual Hunt Ball at The Prince's Hall in Fordings. Nick Brent offers a ride to his friend Ian Macbane, but tells him he'll need to find his own way home from the Ball--as Brent has plans to drive the beautiful Dilys Maine home before midnight. The drive to the dance is uneventful--save for the fog along the way. When Brent's car makes the return trip, the fog is better and he stops just in time to avoid running over a body in the road. Since Dilys has gone to the dance without leave from her strict father, Brent sends her home over the fields while he goes in search of a telephone to report the body to the police.

When Inspector Turner reaches the site, Ian Macbane and his new driver Tom Hudson have discovered Brent's abandoned car and the body--but there is no sign of Brent. The ex-Commando comes stumbling up with blood running down his face and a torn collar. He had gone to Michael Reeves's house (nearest), knocked, and when he received no answer effected an entrance to use the phone. Immediately after ringing off he was attacked in the darkened room and, after a bit of rough house, landed up under a fallen bookcase. He believes--though is not sure--that Reeves had come home, thought he was a burglar, and jumped him. By the time he had gathered his wits, there was no one there.

There are plenty of mysteries for the police to solve. Who is the dead man? How did he get in the road? Was he killed in a hit and run or is this a more strategically planned crime? If it wasn't Michael Reeves (and he claims not), then who attacked Brent? What was Dilys's father doing roaming around that night and why does he want to make it seem that he got home sooner than he did? The rumor mills are running at full speed in the town and stories connect the incidents to everything from the disappearance in the last year of Michael Reeves's sister Rosemary to the supposed unsavory doings of Hoyle, the local pub owner. Later, Hoyle's daughter Betty is nearly killed along the same run of road--did she see something important and has the murderer attempted to shut her up?

It seems to me that Lorac, with her two detectives Turner and Waring, began by wanting to consider the differences in detection between those who use the intuitive, psychological method and those who are more procedure and time-table based. Or possibly showing how the two work in concert to make an excellent investigation. As Divisional District Inspector Thorn (over both men) says:

Makes you wonder what is the basis of detection, after all...Timetables or human nature? After all, criminals are human and maybe young Waring's getting back to basic detection. They ought to make a good pair. Turner with his conscientious routine. Waring with his awareness of humanity.

But then she winds up leaving the conscientious routine behind. We have one meeting with Turner, Waring, and Thorn and then the two detectives go their separate ways--Turner is off to get times and facts straight (and we really don't see him again) and the reader follows Waring as he interviews various witnesses/suspects, soaking in the atmosphere and becoming acquainted with the personalities. It's as if she considers the two types of detection briefly and then rapidly decides that the psychological approach is the best.

Not that I'm complaining. Waring is the more congenial of the two detectives (Turner has an air of sour grapes about him--feeling as he does that he belongs in the C.I.D. and not stuck out in the country). I enjoyed watching his interactions with the various characters and how quickly he gets each person's measure.

Lorac provides her usual interesting selection of persons and loads of atmosphere with the foggy roads and byways of Fordings. Even though this manuscript was found under an entirely new pseudonym, it isn't difficult for those previously acquainted with her work to recognize her style and way of conveying the atmosphere of the place. I am very thankful that Martin Edwards and the British Library found a way to bring this long lost novel into print. It is absolutely delightful and I would hate to have missed out on Lorac's final book. ★★★★ and 1/2.

First line: "Jolly decent of you to give me a lift, Nick."

Labels: 52 Book Club, BC by Erin, Pick Your Poison

Too funny - I just "read" this on Friday! Listened to it, actually. I loved it, too. She was fair about putting clues in throughout the book that could have helped me solve it. I recognized one clue, but misinterpreted it. I always appreciate your reviews.

Thanks, Julie! I do love Lorac--haven't been able to find nearly enough vintage copies of her work (at reasonable prices, anyway).