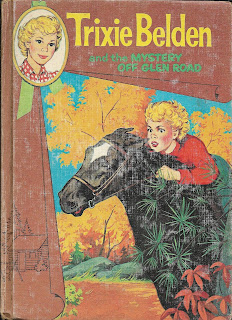 Trixie Belden & the Mystery Off Glen Road (1956) by Julie Campbell

Trixie and the Bob Whites have just put the finishing touches on their clubhouse when a nasty fall storm hits Sleepyside. It brings strong winds and cold air and downs trees on the Belden and Wheeler properties (as well as the neighboring area). This includes a big spruce that knocks out the rear wall of the clubhouse and makes a hole in the roof. The Bob Whites had spent the last of their club savings on the previous work done to make the old gatehouse into a clubhouse. How will they be able to make the repairs before the predicted next storm?

Brian, Trixie's eldest brother, had been saving up for a car and decides to donate that money to the cause. His friends hate to see him give up the dream of a car, so they ask to work as temporary gamekeeper for the Wheeler's huge estate until Honey and Jim's dad can get a full-time man on the job. While doing their rounds, Honey and Trixie stumble upon evidence of a poacher and the Bob Whites have another little mystery to solve.

I have to emphasize the word "little" from that last sentence. While this is a very pleasant read and it was nice to visit with my childhood friends again, I realize now (as an adult) that this one just doesn't have much of a mystery to it. Trixie makes a mystery out of the possible poacher, but it is more her lack of information and a tendency to make assumptions from what little she does know than the fact that there is a mystery to solve. Some of the stories do have real mysteries and sometimes they have downright villainous characters, but this one...not as much.

But that's okay--it's still a nice adventure and we get a good family and friendship story. It's nice to see the lengths that Trixie will go to in order to make sure her big brother is able to have the used car of his dreams. ★★★

Last lines: Was another adventure waiting around the corner for them? Trixie sighed happily and sincerely hoped so.

As much as I love Trixie (and I do), I'm not much of a fan of this book. The mystery is so thin and it had my rolling my eyes, even the first time I read this one as a young teen.

Mark, the mystery is thin and I remember liking this one more when I read it the first time (fourth grade, maybe?). As I mention above, what I like this time is watching Trixie go to great lengths to make sure Brian gets to have his jalopy.