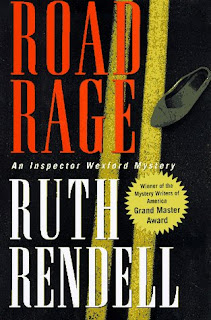 Road Rage (1997) by Ruth Rendell focuses on the unrest that takes over the Kingsmarkham area when a beautiful valley is destined to be broken up to make way for a new highway. Environmentalist groups of all sorts descend on Kingsmarkham for protests and some of the groups set up camps in the wooded area and even construct tree houses to live in. In the midst of all this, the body of a young German woman who had gone missing some time ago is discovered in the brambles destined for the bulldozer. She had been raped and strangled and Inspector Mike Burden is convinced that one of the drivers for Contemporary Cars, a new taxi service, is the culprit, but he and Chief Inspector Wexford are unable to find enough evidence to make a charge stick.

Later that summer, Contemporary Cars is again in the police eye when a group calling themselves the "Sacred Globe" take over the taxi service for a few hours and take five prospective passengers as hostages. Their demands are simple--give them plenty of publicity and stop the construction of the highway. A hostage situation is bad enough, but it's made worse for Wexford because one of the hostages is his wife Dora. Wexford and his team are in a race against time to find out where the hostages are kept before the Sacred Globe makes good on their promise to kill the hostages one by one if their demands are not met.

When the group finally lets Dora go, Wexford's team gets a great deal of information. Since Dora is the wife of a policeman, she was well aware of the type of details she needed to pay attention to. Even though she was prevented from seeing where she was being taken, she tried to glean every bit of detail she could and was able to give a limited description of her captors even though they were hooded. To enhance her memories, she agrees to hypnosis which brings out a few more details about her surroundings. There are also clues found on her clothes and the police have many leads to follow up. But just how clever are the kidnappers? Have they managed to lay a few false trails and, if so, will Wexford's team be able to sift through the red herrings to find true answer?

This is one of the more suspenseful of the Wexford novels. Generally, Rendell's suspense novels are stand-alones, with the Wexford novels following more standard police procedural lines. Of course, a great deal of the suspense is conveyed to the reader through Wexford and his doubled concern for the hostages with his wife being among their number. It has been quite some time since read Rendell on a regular basis, but it's my sense that this one the better novels in her later works. It's a good solid mystery with some clever plotting and it gives a good look at the environmentalist groups and protests of the late 1980s and 1990s. ★★★ and 1/2.

First line: Wexford was walking in Framhurst Great Wood for the last time.

Last lines: She looked at him with a half smile. "If you'll drive me to the station."

Deaths = 3 (one strangled; one fell from height; one shot)