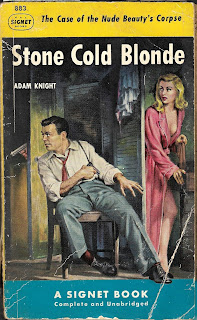 The first in the Steve Conacher private investigator series. Conacher, who has made a name for himself finding missing person, finds somebody in his own office. She's very blonde, very pretty, and very dead. Whoever stabbed her and left her as a present for the detective took every stitch of clothing she was wearing and everything else that might possibly have identified her. Conacher sets out to find out who set him up to take the rap for the dead woman's death and winds up hunting for an amateur jewel thief and the missing jewels as well. He also winds up nearly beaten to death by a suspect as well as seduced by his client in the jewelry case. The investigation will lead him from a luscious lawyer's office to a jazz club in Greenwich Village to an Italian joint near Coney Island and will have Conacher out for blood by the end when the bad guys take out his best friend along the way.

Earlier this year I read a later installment of the Conacher series and it seems that his detective style has remained constant from the beginning. He's not much of thinker. His method of questioning suspects is to yell at them and if that doesn't work, then knock them around a bit with a pistol butt or anything else that's handy. His ability to have hunches and jump into situations rivals the women's intuition school of detection. He's all full of himself for having tracked the missing jewel thief in a mere eight hours. I'm still trying to figure out how he got from Point A to Point Q without any real detection. He just somehow knew who to go yell at to get answers--even though he makes a big deal out of the fact that that he has nothing to start with. And isn't it cool how all the different parts all weave together into one basic plot?

Seriously, if the two Knight books hadn't come as part of a lot of several vintage books (some of which I very much wanted) from Ebay, I doubt I would ever have bought them individually. Signet isn't one of the publishers that I actively collect (like Dell Mapbacks, for instance). And I can safely say that unless he gets shoved into another lot of books I won't be buying up any more of them. I'm not a huge private eye fan anyway and Steve Conacher doesn't have much in the way of appeal. Personally, I liked his friend Abe Feldman a lot more. It's a shame that Abe gets bumped off in this debut novel of the series.

Unlike I'll Kill You Next! (my previous venture into Conacher's world), I can't even say that the plot was interesting. There is a slight twist at the end that might have been good--if the rest of the story had been half-way decent. ★

First line: The name on the door was mine.

I didn't know there was a book of etiquette on stabbing. (Steve Conacher; p. 17)

Last lines: But I had plenty of Gus Bryant's dough stuffed away in my haberdashery. And it was a pleasuer to fatten the police on Bryant's money.