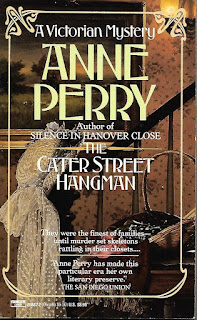 The Cater Street Hangman (1979) by Anne Perry
Death walks the streets of proper society. Young women--both serving girls and young women of respectable families--have fallen prey to a killer who has been dubbed the Cater Street Hangman. His victims are found garroted with a thin wire. At first, the proper ladies and gentlemen prefer to believe that the women brought the attention of this madman upon themselves through "loose morals" or by keeping the wrong company and that it must be some insane person from the wrong part of town who has come to prey in the respectable neighborhoods. But more victims fall and it becomes clear that all the women were of good character. It also becomes clear that no one from outside the area could now roam at will without being noticed--everyone is on high alert for suspicious strangers. But then...that must mean that the killer lurks among them, hidden behind a familiar and innocent-looking face.
The Ellison family have always been secure in their place in society and comfortable in their neighborhood. But when the Hangman kills their maid, their quiet, orderly life is upended. Inspector Thomas Pitt, a good, clever man who intends to catch this murderer, returns again and again to ask questions and prod them for more information to help solve the case. And...to see more of Charlotte Ellison. Charlotte is the least "feminine" of all the Ellison girls. She is forthright and outspoken. But beneath her apparent sharp tongue is a kindly heart and he finds her conflicting attributes compelling. But could a respectable, gently born woman ever look twice at policeman? He will have to balance his interest in catching the killer with his desire to protect the woman he admires.
This is the first novel in one of the first historical mystery series that I remember reading. I first bought and read it in 1990, when the edition pictured at the top right was released. I am particularly fond of the Victorian era and this series suited me down to the ground. Recently I found myself wanting to revisit the series--in part so I could review a book I remember enjoying and also to see if I still found it as absorbing twenty years later. Since most of the books I've read are in storage (waiting for the floor-to-ceiling bookshelves I've promised myself), I got an audio edition from our library rather than dig through my storage containers. Davina Porter's narration of the story was quite delightful and I found myself drawn into the world of Victorian England just as surely as if I had read the novel myself. 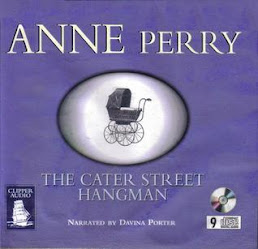 There are times when I can reread a mystery novel and still be surprised by the ending--if it has been
long enough between readings. But with the first CD of this recording, it was as though twenty years had not passed and I remembered nearly everything including who did it. This didn't detract from my enjoyment, however. It speaks to the vividness of Perry's writing--that having stepped back into the world of Charlotte Ellison and Thomas Pitt, it all came back so clearly and enjoyably. Perry brings the Victorian era to life and peoples it with compelling characters. It was amusing to find myself sympathizing with Charlotte (whose mouth often gets her in trouble--as did mine when I was younger) and going through the same process of disliking Emily in the early chapters and gradually warming to her. It is not always the case that one enjoys a book the same way when rereading it years after an initial run-through and I was very pleased to find this one as pleasing now. ★★★★

First line: Charlotte Ellison stood in the center of the withdrawing room, the newspaper in her hand.

*Just an observation: I have no idea what the baby carriage is doing on the cover of the audio novel. There is no baby carriage mentioned in the story at all that I can recall. Or even a baby for that matter. Maybe the old-fashioned perambulator is supposed to evoke the Victorian era?

Thanks for the review. 🙂 The strong rating tempts me to pick it up; I've seen some copies in my local library catalogue. I was wondering if the attraction of this novel and the series lies with the history and story-telling - or with the fair-play clue-ing and puzzle hoodwinking as well? 🤔

Thanks for a great review. I will be looking this one up for sure (along with the other Carr book you reviewed for the #HistFicChallenge). ~Lex

Jonathan: The storytelling aspect is definitely a strong attraction. I think Perry pulls the reader in very nicely. It's difficult for me to say on the fair-play and puzzle on this one--since I remembered it so vividly and, to be honest, she doesn't really provide a very large cast of suspects. I do remember, however, that she hoodwinked me enough that I suspected the wrong person the first time even with a small cast.

Lex: You are welcome!