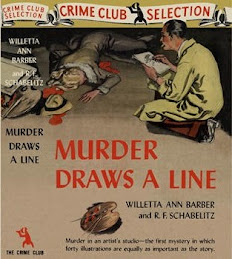 Murder Draws a Line (1940) by Willetta Ann Barber & R. F. Schabelitz
Christopher "Kit" Storm is a moderately successful commercial artist who also does portraits and acts as an artistic consultant to the New York Police Department. He assists his friend, Captain Tony Shand with sketches of the crime scenes as well as the suspects interviewed. But he's never been as personally involved in a case as he is this time....
Freda Bransen, the middle-aged singing teacher who has rooms across the hall from Kit's studio is found stabbed to death in Kit's rooms. The studio is a wreck--with blood spattered over some of his work, one drawing slashed through by the woman's high heeled shoe (possibly in the struggle for her life), and the portrait of his fiancée's Uncle Malcolm all but completely ruined. Kit and Sherry (Sheridan) Locke, his fiancée and sometime model, didn't really know Freda--just to talk to in passing--and the big question on their minds is: Why was she killed in Kit's studio? In fact, how did she get in? Once those two questions are answered, everything else falls into place but it's going to take time to get there.
The investigation quickly reveals that several people were better acquainted with Freda Bransen than they first told Captain Shand. Or who were in the building when they stated categorically that they weren't. There's Dr. Rollins, the woman's dentist--but why did he write her a post-dated $5,000 check? There's Alessandro Marioti, a temperamental Italian singer, who harassed Freda when they both were in the Metropolitan Opera's chorus. There's Alfred Putnam, one of her pupils, who neglected to tell about his late-evening singing lesson. The more they find out, the more Shand believes that it will wind up that "the world and his wife" were in that building, if not in Kit's studio. When Kit discovers one final clue--overlooked in previous searches, he finally has all he needs to stage a final showdown with a very clever and (so far) lucky killer.
Quite honestly--could have dispensed with the whole first chapter and Sherry (Sheridan) Locke's had-I-but-knowning and foreshadowing and getting sidetracked by how things used to be. Then we have to be told this long tale about Uncle Malcolm being persuaded to allow Kit to paint his portrait. Instead of talking about how she doesn't know how to start and how Kit urged her to tell the story and going off on these tangents...I wish she'd just plunge right into the story. And even when she does get started, our narrator seems to be pulled kicking and screaming into getting on with telling us what happened. She'd much rather sprinkle little hints of the horrors to come....

There is also a great deal of overwrought, over-the-top writing.  Such as:

We were to have scarcely any thoughts which didn't grow like dank morbid fungi from the fringes of all this horror. Nightmare days were to come, all out of drawing, dark shadowy hours with bright red streaks of fear running through them, nights of suspense with terror mounting and the helpless devitalized feeling of not being able to stop any of it.

Despite all the hand-wringing and foreshadowing (way more than in any book I've read so far--including the mother of the Had-I-But-Known, Mary Roberts Rinehart), this is a good, solid mystery.  The characters are well-drawn and the dialogue is realistic and briskly moves the story along. The plot is well-done with lots of good clues. I was rather proud of myself for catching some of those hidden in the drawings. I enjoyed the novelty of having Kit sprinkle sketches of the mystery scenes and suspects throughout the book.

I do hope that future books (I have the next three in the series sitting on the TBR) will see Barber tighten up her story--cutting out the preliminary hemming and hawing and just jumping into the story as well as tidying up the endings. The villain reveal occurs a little early and there is a very long-winded explanation and wrap-up which takes up two more chapters. ★★★

John at Pretty Sinister Books has also reviewed this title. Please click on link to see his thoughts.

First line:  I don't quite know how to start telling this.

An uncomfortable doubt began to take root in my mind, and I realized suddenly the full import of what was happening. This was the way it was to be. He was our friend, yet already we had begun to question him. How many more people, whom up until now we had accepted and trusted, were we to suspect under cover of our thoughts before this was through? (p. 53) 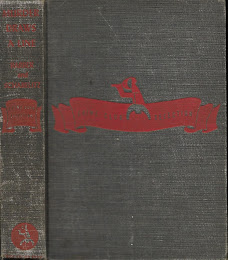 This whole case is not only screwy, it's sheer insanity. (Detective Tony Shand; p. 67)

Last lines: I do not agree with her, quite. But then I have Kit.

Deaths = 4 (one stabbed; two shot; one fell from height)