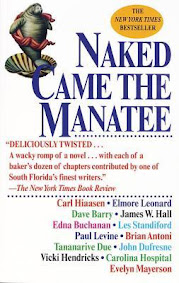 Thirteen Florida writers passed around a round-robin crime thriller--each contributing a chapter to this story of two inept, small-time thieves hired to transport mysterious cargo across Biscayne Bay. What follows is a madcap tale that involves a manatee named Booger, a 102 year-old woman who likes to skinny dip at midnight with the manatee, three head of Fidel Castro (and only one is still attached...), Jimmy Carter, and various series characters belonging to the aforementioned writers. We have gangsters and Castro rivals, reporters and lawyers all trying to hold onto the precious canisters containing Castro's heads. We have bodies showing up everywhere from the Bay to a bridge to a low-profile hotel. And with thirteen writers adding more complications in every chapter, it's anybody's guess what the plot is and how it will all turn out.

Sometimes these round-robin writing adventures work out. The Floating Admiral by members of the Detection Club (Agatha Christie, Dorothy L. Sayers, et. al) was highly entertaining and the writers involved made every effort to produce a mystery that not only entertained but made sense and tied up all the threads satisfactorily. Sometimes these things don't work out. This would be a case in point. Every time it seemed like one of the writers was trying to give us a mystery that had some sort of continuity to it, then the next writer would have to throw in something to throw the rhythm off. It seemed to me that most of the writers were playing a game of one-upmanship. "Oh, you introduced that character and that complication? Well...hold my beer and watch this!"

At best, this is a light bit of fluffy entertainment. But it's not at its best very often. The most likeable characters are the manatee and Marion McAlister Williams (our elderly skinny dipper)--and one of the writers in their wisdom (insert heavy sarcasm) decided to kill off one of them. So far, the collaborative novels written post-2000 haven't fared well with me. I gave Natural Suspect  (written in 2001) a one-star review and guess what? This one gets the same. ★

First lines: Saturday night, Coconut Grove. It was the usual scene: thousands of people, not one of whom a normal person would call normal.

Last line: Every mammal for himself.

Deaths = 6 (one strangled; one blown up; one choked to death; two shot; one killed by boat propellers)

Dave Barry of The Miami Herald! He is to literature as Mel Brooks is to movies. We went to see him in person and loved his presentation.