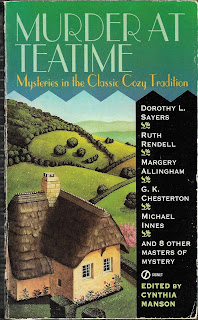 A short story collection to delight those who like crime served up with their tea and crumpets. Oddly enough...none of the stories features poison in a tea cup, though a tea kettle does feature prominently in the story by Peter Lovesey. As with all collections there is a mix of strong and weak stories--perhaps too much milk is watering down the tea?--but overall it is an enjoyable anthology with robberies, murders, and even a ghost or two. A couple of the stories leave it up to the reader to decide whether a murder has happened. ★★★ and 1/2.

"The Name on the Wrapper" by Margery Allingham: a semi-posh thief makes off with a haul of jewelry and antiques at the annual Hunt Ball. Albert Campion was in the neighborhood at the time and Superintendent Oates asks for his help.

"The Necklace of Pearls" by Dorothy L. Sayers: In which a valuable string of perfectly matched pearls goes missing at a classic country house Christmas party. It is up to Lord Peter Wimsey to see where they've gone before the culprit can make off with them permanently.

"The Crime of Miss Oyster Brown" by Peter Lovesey: Pearl & Oyster Brown are twin sisters who have lived a circumspect and ultra-private life. But when Pearl doesn't appear for a while the townspeople begin to suspect the worst.

"Strychnine in the Soup" by P. G. Wodehouse: In which we learn the lengths to which murder mystery fans will go to finish a book they have begun.

"Murder at Rokeby House" by C. M. Chan: The Prendergrasts have to open their country house to tourists in order to make ends meet. Phillip Bethancourt, a family friend and amateur detective, is roped into leading a tour and for fun he makes things up since he really doesn't know anything about the history of the objects. But then they find discover a dead body on the pool table...It's time to stop making things up and get down to facts.

"The Borgia Heirloom" by Julian Symons: An American writer is researching unsolved British murder cases. When he approaches Lady X, he gets more than he bargained for.

"Dr. Hyde, Detective, & the White Pillars Murder" by G. K. Chesterton: The only appearance of this particular detective. Dr. Hyde and his two proteges are asked investigate the death of Melchior Morse. Strangely, Dr. Hyde leaves the investigation to the two fledgling detectives. There are only two physical clues--a half-footprint and a cigar stump. In the end, the star pupils discover a very surprising murderer and decide that perhaps detecting isn't for them after all.

"Policeman's Holiday" by Michael Innes: Sir John Appleby and his wife are on a motor tour in the West Country and Lady Appleby insists on visiting Roydon Abbey because "there's a famous El Greco" painting. Only there isn't--it's disappeared off the wall. The owner claims to be amazed, but his somewhat myopic housekeeper insists he took the painting down himself three weeks earlier.

"The Ministering Angel" by E. C. Bentley: Philip Trent's friend Arthur Selby presents him with an odd incident which occurred just before Gregory Landell died and asks for Trent's advice. After hearing details of a business transaction that didn't need to take place, Trent decides he simply must view the late Landell's rock garden. And there he finds clues to a hidden will.

"Home Is Where the Heart Is" by Neil Lamburn: The Manningtons buy cottages, refurbish them, and sell them...until they find Keeper's Cottage. The cottage comes with a strange stipulation--the former owner's son must be allowed to stay there for life. And then Mannington makes an interesting change to his will as well.

"The Wicked Ghost" by Christianna Brand: The new bride of the Earl, Edward Fitzmerrin, is feeling a bit lonely and restless--have been left at home by her adventuring husband. The elderly Fitzmerrin aunts think it best to tell her the story of the ghost of an earlier, wicked earl.

"The Gallowglass" by David Braly: Another story with a ghost--this time a "gallowglass," an Irish mercenary of the 17th C. This particular ghost supposedly vowed to kill every Englishman he saw "till the crack of doom." Sgt. Sullivan is sent to investigate a report of "trouble" at a cottage. The owner is found dead with a battleax in his chest behind a locked door. And the plans for a new sea camera are missing.

"Fen Hall" by Ruth Rendell: Three boys go camping in the woods at Fen Hall, a run-down country house belonging to the friend of the parents of one of the boys. While there, a big storm comes up and a tragedy results.

First line (first short story): Mr. Albert Campion was one of those useful if at times exasperating people who remain interested in the world in general at three o-clock on a chilly winter's morning.

The two twin souls gazed into each other's eyes. There is no surer foundation for a beautiful friendship than a mutual taste in literature. (from "Strychnine in the Soup")

"That's the way to appreciate a thing: don't have it too often, and take a hell of a lot of trouble about it when you do." (Arthur Selby in "The Ministering Angel")